Horror, in many ways, is an art form. It draws out emotion, and sends people into frenzies. It captures life and death, it makes us feel less alone. This special form of art tackles the darkest and most difficult topics while bringing them to light in a more manageable way. This week’s Featured FearMaker embodies the special form of dark art to create her own colorful visions which are mixed up and complete deranged worlds.  Lindsay Denniberg makes films that explore incredibly unique topics on a visual art canvas.

Born and raised in South Florida in the 80’s, Lindsay saw Tim Burton’s Edward Scissor Hands at the age of seven when she decided to become a filmmaker. She would spend her youth wandering through the “haunted isles” of the video store daydreaming about all the films she was not allowed to see. After studying Cinema at the University of Central Florida, Lindsay moved to New York where she would become the assistant to the head of Troma, Lloyd Kaufman. Lloyd’s motto of “make your own damn movie” resonated with Lindsay, prompting her to follow her dreams and make her “own damn movies”. 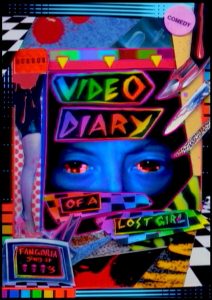 Lindsay took Kaufman’s advice and moved to Chicago, where she furthered her studies at the Art Institute of Chicago. There she made her first feature film, Video DIary of a Lost Girl, with help from friends in her school. The film dealt with more taboo topics, following a succubus who will menstruate to death unless she sleeps with a man, who will in turn die. The film is a flashback to 80’s and 90’s colorful VHS, MTV’s liquid television, and German expressionism. Video Diary of a Lost Girl received the Audience Choice Award at the Chicago Underground Film Festival

Lindsay perfers to make films based on more unearthed horror topics. “Menstrual blood I feel is an untapped body horror sub genre that I want to be the Queen of desperately in cinema.” Other than films like Ginger Snaps and Carrie, there are not too many films that deal with menstruation. Lindsay finds it as a delicate balance between life and death. “I’ve always seen menstrual blood as the manifested space between life and death- an uncanny primordial ooze that even Dracula can be squeamish about because it is neither dead nor alive.” To most men, menstruation is worst than a four letter cuss word. Quite literally any other bodily function is alright in film, too much can even be comical. However, once men hear the word they can’t help but shudder. In truth, it is neither alive nor dead, good or evil. It simply is, and yet it is still so grossly hidden away from modern society. Through her film, Lindsay hopes to explore this theme and hopefully change the views of so many men throughout the world.

Her next feature film is currently in pre-production. Killer Makeover is a film which explores the horrors of beauty. As Lindsay puts it, “death is in the eye of the beholder.” Long time friend and collaborator Chris Shields is the brain behind this film, creating the idea and acting as head screenwriter. Actress Sarah Fensom and filmmaker Phil Chernyak will also be working on the script. The screenplay took around a year to complete, and Lindsay is looking forward to taking the crazy world on paper and turn it into something tangible.

Lindsay Denniberg is a hard working, passion driven artist. From shooting to distribution, she does it all herself. ALthough many things may get in the way of completing a project, she always keeps her passion first, and makes sure her films are exactly what she intends them to be. Lindsay cannot and will not be waved from her vision, no matter what. This drive and determination ensures that Lindsay will stay true to her art, and thus keep the life within the horror genre. Video Diary of a Lost Girl is currently available on DVD.