We’ve seen it before– and we’ve also been warned before– yet none of the bad omens found in horror films, those that are supposed to deter us from the perils of technology, ever actually deter us from anything. Although a Tinder-like app is at the center of Slasher.com, the film posits that it’s not so much the tech, but the people behind the screen that are the true monsters.

Something like Tinder is ripe for exploitation (in real life and film). What is supposed to be an avenue to engage with strangers, screen them, and (potentially) meet them, hoping all the while that the person on the other side is not a complete maniac, is a real world concern. Jack (Ben Kaplan) and Kristy (Morgan Carter) have met through such an app and they’ve taken all the precautions necessary so as not to end up– in the worst of scenarios– dead. These extra measures are the result of a recent spate of murders by a killer who preys on unsuspecting individuals using the same app Jack and Kristy used to meet.

Kristy plans a whole getaway for the two in the backwoods of Missouri, away from the city noise, and within the placidity of a woodland cabin. It all plays out in idyllic fashion and they both seem to get along rather well. In the midst of this rare occurrence of jubilation, in the hit-or-miss world of dating, is when one begins to wonder: is this too good to be true? Admittedly, not everything is perfect, at least not with the surrounding area.

The family that tend and own the grounds are a bit wacky, to say the least. There’s the hyper-sexual Momma Myers (Jewel Shepard) and her bear-like redneck husband Jesse (R.A. Mihailoff). Then there’s their stunning daughter Caitlin (Rebecca Crowley), the childlike, and sexually rebellious teen who wants nothing more than to bask in the freedom of city life. The Myers’ idiosyncrasies go beyond what one would consider normal behavior; Momma loves using the same mixing spoon for everything, including masturbation (somehow I doubt she cleans it off after usage); Jesse seems to have the hots for his daughter, forcing her to play with dolls and keeping her in a perpetual state of innocence (at least in his eyes). 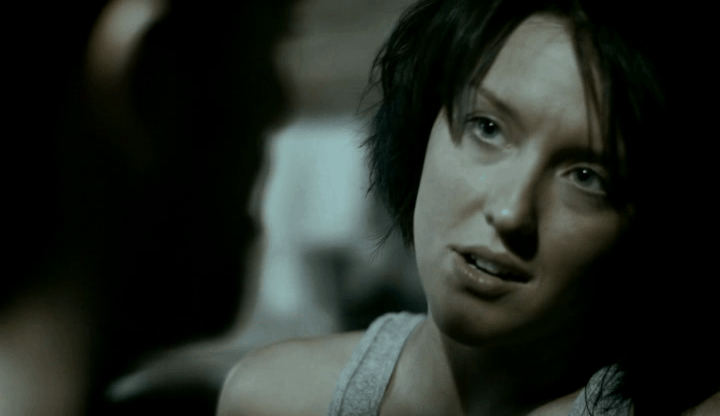 Slasher.com simmers and envelopes us with the cutesiness of Jack and Kristy’s near perfect getaway and bubbling relationship. Director Chip Gubera almost makes us forget what type of movie we’re watching, but bookends the film rather nicely. The film’s second act almost entirely consists of lovey-dovey scenes and moments of carefree interest in the townfolk’s eeriness. However, hiding behind the facade of pleasantries lurks something ready to pounce on the new couple, and for the audience, this creates suspense that lingers until the threat’s much awaited inevitable arrival.

Although uneven towards the end, as the film tackles a tonal shift and a twist that satisfies the narrative in part, things begin to get real interesting. Don’t expect Slasher.com to be a predictable slasher film, or merely another cautionary tale about the foibles of our technology, there’s more, and that’s thanks to the aforementioned shake-up in the third act. For better or for worse, it forces the film to switch gears and take us somewhere unexpected. Nevertheless, Slasher.com makes up its shaky ending by, hitherto, setting up an impressive and interesting set of events and characters.

Slasher.com is now available on DVD and various VOD platforms including Amazon Video.

Goriest and Strangest Trailer of the Year Goes to “KODOKU: MEATBALL MACHINE”
December 13, 2016