Green Room takes place in the rain drenched backwoods and dreary melancholy of the Pacific Northwest. Desperate for cash, the punk band The Ain’t Rights take whatever gigs they can while on the road, even if it means taking a show deep in the woods at a joint that harbors an enclave of skinheads. 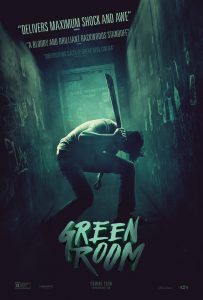 The Ain’t Rights are Pat (the late Anton Yelchin), Reece (Joe Cole), Sam (Alia Shawkat), and Tiger (Callum Turner) and they’re about to enter a world entirely by accident. They didn’t ask for malaise, but they get just that. It’s supposed to be a quick in-and-out and get paid sort of deal. It’s clear they are uncomfortable performing in front of a sea of Neo-Nazis and who wouldn’t. They come very close to succeeding in their venture and high tailing it out of there in their dingy van with their well-being fully in tact, but the universe has other plans.

As they’re about to head out, Sam realizes she has forgotten her phone. She rushes back to the green room only to stumble upon a murder, some poor schmuck with a knife through his skull while Amber (Imogen Poots), another skinhead, appears to be in as much danger as the corpse. Now Amber and the Ain’t Rights are stuck in the green room with a couple of skinheads in a tense standoff between each other and those on the other side of the door.

What follows is a shocking and tense tale of survival that will have you gripping your seat and squirming at the sight of the horrendous. What works in writer and director Jeremy Saulnier‘s film is the brutal shock value that never lets up and is still able to surprise. The film is brutally gruesome and violent yet doesn’t feel tasteless or overdone but keeping in line with the brooding mood the film has hitherto set up.

One sees very little escape for these young men and women and even more so when Patrick Stewart as Darcy Banker makes his chilling appearance as owner of the club and the fixer focused on one thing: sorting this whole mess out. He’s smart and lucrative, finding ways to cover up not just one crisis but two, the witnesses and the murder. All the while Darcy is calm and collected methodical, seldom fazed by any complications, seeking only other alternatives, going about his plan unflinchingly.

Green Room is a visceral and claustrophobic experience. It is a unique take on survival horror that builds up to the film’s thrilling cat-and-mouse game. It sets itself up to backdrop the racism hidden deep in the woods of America, an issue that seems to pervade the country even now.

Green Room is now available on Blu-ray/DVD and VOD.