Ava’s Possessions begins with the tail-end of a demonic possession and its violent outcome. This is not a flashback alluding to or indicating the film’s focus, but instead this is where the film’s story begins. Based on this prologue one can easily fall under the impression that this is just another movie about a woman being possessed by an outside force. I often err in matters of film, however, my initial reaction of dismay was swiftly torn asunder by writer and director Jordan Galland‘s uniquely intuitive, imaginative, and captivating film about the aftermath and the previously unexplored consequences of a possession. How the hell does one go back to normal society after such a tumultuous and life changing event like a demonic possession? No one thought to ask or make a film about it, until now. 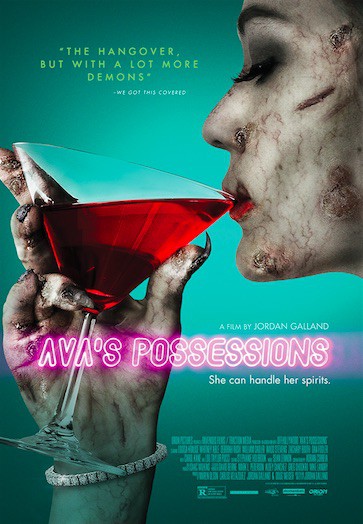 Ava (Louisa Krause) recovers from perhaps the worst hangover in cinematic history. This is not your normal alcohol fueled hangover. This type of malaise is the result of the intoxicating power of a demonic force. Ava’s been kept busy while under the grip of a demon, but she can’t seem to remember her guided malice, much to her frustration. In her absence she has left behind a destructive path of mayhem and violence and spends most of the film trying to recollect as many details as she can to fully paint a picture of the events. As Ava attempts to grasp some sort of comfort in a renewed normal life, questions arise. Why is there a bloodstain underneath her rug? Who does a fine watch found in her apartment belong to? And how did she get involved with a prostitute named Noelle (Alysia Reiner)?

But Ava’s troubles don’t end there, with the news of her possession quickly becoming the whispering gossip amidst her friends and family. Ava is placed in a rehab program (Spirit Possession Anonymous) a support group that helps recovering victims of demonic forces cope with this transformative event. Here she meets reckless, and perhaps her only friend, Hazel (Annabelle Dexter-Jones), who seems to enjoy the demonic ride of possession. Possession bears a heavy burden and stigma, and aside from societal ostracization, these victims are susceptible to the whims of demons looking for a host, with prior possession making them easy targets for these nefarious forces. Ava is never divorced from the power of demonic forces often assaulted by visions of her tormenter.

The film never gives way to dull moments as Ava attempts to piece together her time under the dark shadow of a demon– doing so like a hungover party animal trying to recall the previous night– with the mystery behind the details of her destruction fascinating enough that you’ll come under the spell of the film’s charm.

Ava’s Possessions entertains with its enticing and original premise, however, the film possesses an intriguing allegorical subplot about women. When Ava is ostracized for her forced possession, despite the phenomenon clearly not being her fault, it recalls victims of sexual assault and the blame sometimes placed on the woman, as enticers of danger and those responsible for male sexuality and containment. No matter who Ava talks to she is seen with a certain degree of disgust and held at arm’s length because of her possession. Later the demon goes on to represent female sexual guilt as a masculine force that prevents the woman from having a satisfactory sexual rendezvous (Ava and Ben, played by Lou Taylor Pucci).

Moreover, Hazel’s character presents a threat to the rehab program as she seemingly represents a liberated woman. Hazel flaunts a flamboyantly ecstatic thrill for possession, akin to a societally perceived promiscuous female sexuality. In this case, possession doesn’t represent sexual assault but a woman’s choice to partake in sex freely, displaying an uninhibited sexual drive represented by a thrill for possession. Sexual guilt is bestowed upon the unfettered Hazel and her thrill for possession (ie. sexuality) is perceived as threatening and dangerous. Hence, the film is an exploratory look at the madonna-whore complex, the contradictory, and parochial categorization of woman and her sexuality.

Visually director Jordan Galland and Adrian Peng Correia create a unique atmosphere which allows the audience to feel as if they are part of the surreal dream. Incredible lighting and unique camera angles create a style all it’s own. Ava’s Possessions feels like part art piece and part indie film in all the best ways. Harsh colorful lighting allows for each frame to present a piece of eye candy allowing for a very pleasurable experience.

Part satire and allegory as much as it is horror and mystery, Ava’s Possession is an interesting blend of devilishly ingenious and uniquely complex writing, which plays around with homogenous horror conventions and redefines a sub-genre. The film offers a compelling take on a deeply saturated sub-genre of horror that has brought a recent abundance of “possession” films, but Ava’s Possessions manages to be refreshing and stands out as an unexpectedly original and brilliantly conceived film with a deep seated interest in sexual politics.

Review: ‘The Dark Military’ is Tense, Raw, and Unrelenting
December 4, 2017