2015 was a great year for horror films, and we were so glad to have it be our inaugural year. On our latest episode of Tea Time Of Terror, our two founders tried their hand at creating their top 10 indie horror films of 2015. Here is our list.

#10 Expressway To Your Skull 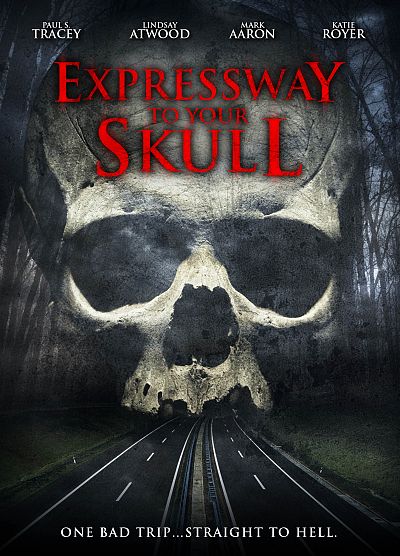 The ultra low budgeted Expressway To Your Skull directed by Michael Okum, tells the story of a troubled couple who go out to the woods to eat some magic mushrooms. The imagery in this film is surreal. The way Okum manages to visualize the psychedelic trip the protagonists are experiencing is extraordinary. The story keeps the audience on their toes the entire time, with a few twists and turns that will make this a great watch to anyone who is willing. 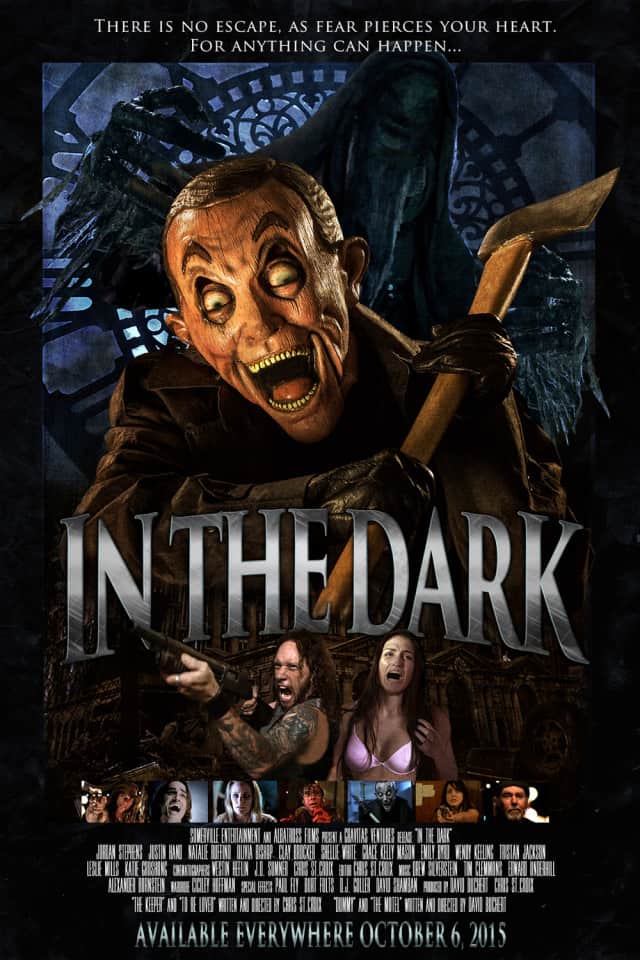 Anthology film, In The Dark, comes from filmmakers David Buchert and Chris St. Croix. The Tennessee duo assembled an eclectic group of stories which span across the entire genre. This film contains demonic beings, a terrifying killer, and a man eating VCR. Despite the low budget, Buchert and St. Croix manage to make In The Dark feel like a full sized Hollywood production.

Alleluia: The Devil’s Carnival happens to be the first film We Are Indie Horror covered on a red carpet. The film is incredibly stylized and magnificently well done. Being a musical, a rock opera to be specific, helped put this one on the list. The sequel to Darren Lynn Bousman’s original Devil’s Carnival from 2012 continues Lucifer’s quest to take over heaven, but this time the audience goes to heaven. Less rock n/ roll, more swing and jazz themes, but Tech9 lays down a stellar song in the middle that is an absolute highlight of the film. Bousman is the returning director, with Terrance Zdunich penning the script and songs. Overall this film is fun and a foot tapping good time. 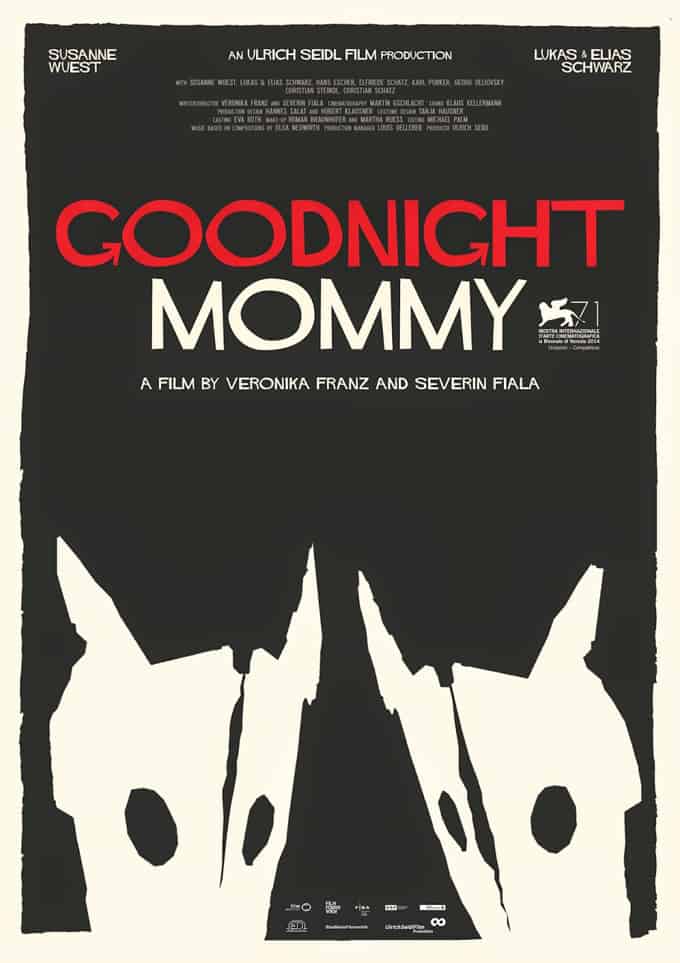 The Austrian film Goodnight Mommy, won the world over with it’s trailer alone. That trailer emphasized the fear so much, that several audiences were disappointed when they finally saw the film. No, it is not a terribly dark monster killing everything in sight, but it is a phenomenal story about a mother and sons, and the innate trust they have, or had, for each other. It is dark bordering on the line of torture with no gore. Goodnight Mommy is a pure and unadulterated psychological horror film that creates a real discomfort while watching the boy torture his own mother. Truly a disturbing story that will make you want to call your mother and apoligize when it is through. 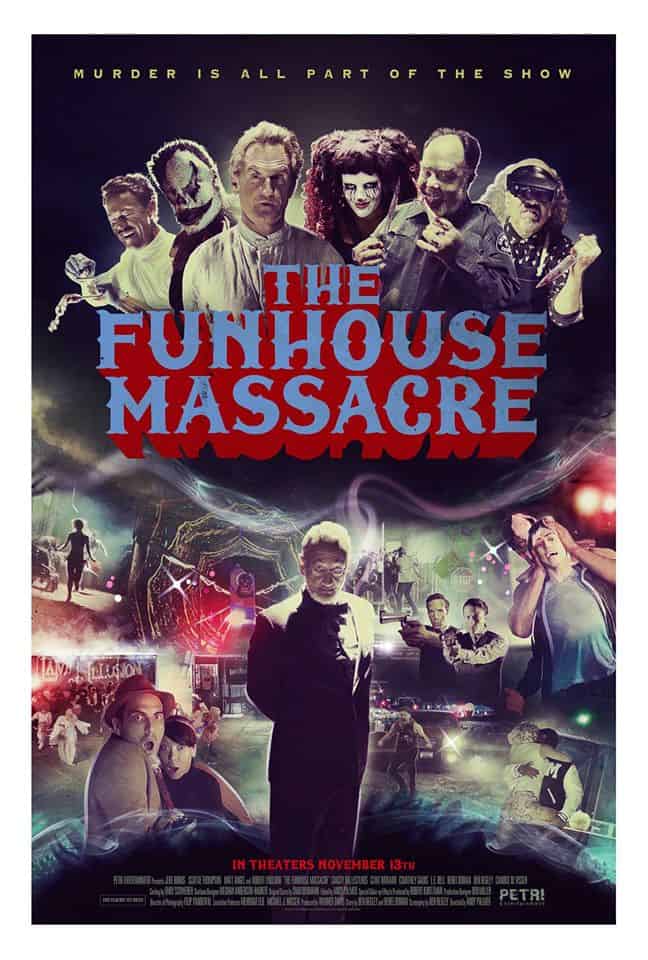 Along with Deathgasm, The Funhouse Massacre is the most fun film on the year. The story is epic: six serial killers escape from prison and hideout in a haunted house, designed with the killer’s in mind allowing them to perfectly hide and slaughter all who enter. The film is shot beautifully, and has a phenomenal cast. A fun and entertaining film from start to finish. It truly is a bloody good time. This film had a small theatrical release which most people missed, but is expected to release on DVD and VOD soon. 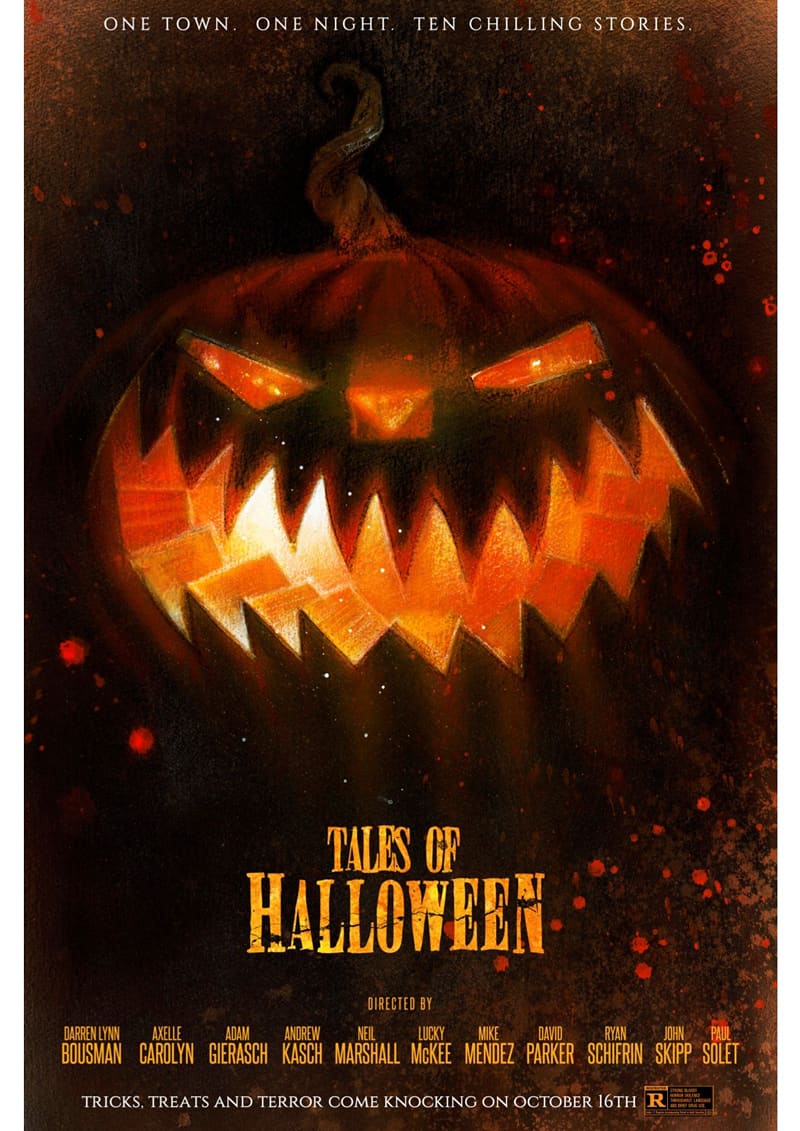 Another anthology film, and the second Bousman film on this list, Tales of Halloween has quickly become the newest Halloween anthology to watch every year alongside Trick r’ Treat. Spearheaded by Axelle Carolyn, ten short films featuring eleven directors and about two hundred cameos from the horror world makes this film packed with action. Guest directors include Mike Mendez, Neil Marshal, Darren Bousman, John Skipp, Andrew Kasch, Adam Gierasch, Lucky McGee, Paul Solet, Dave Parker, and Ryan Schiffrin. They each give incredibly unique stories with creative monsters and legends. Yes, ten short films is a lot to watch, but they are done in a way that is neither boring or overwhelming. Truly a fun watch for every Halloween to come. 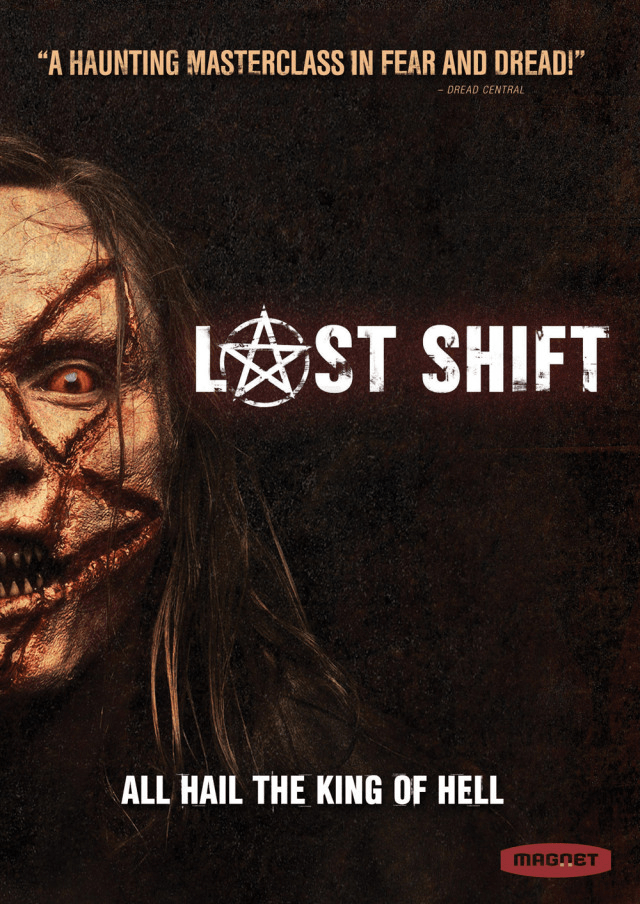 Anthony DiBlasi’s Last Shift might be the scariest film of 2015. We watched this film on a sunny afternoon while hiding behind a pillow because it is so downright scary. Juliana Harkavy plays a new cop whose first duty is to look after the old police station while the new one is being set up just down the street. Things go south when the spirits of a hellish cult come back for her. Last Shift is full of horrifying imagery and chilling twists. There isn’t too much we can say without giving the plot away, but watch this film alone, in the dark. Then enjoy all the nightmares that follow, if you can fall asleep that is. 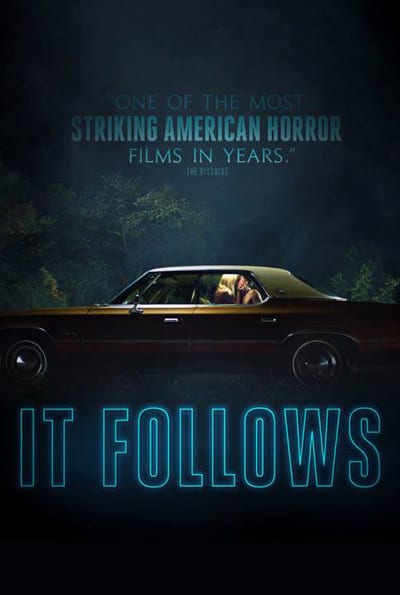 It Follows is not for the general flim viewer. It is made for the hardcore horror film aficionado who loves horror and everything that comes with it. Most people like to compliment the soundtrack, which is exceptional, but the real conquest in this film is all of the commentary on horror films today. Everything from the sex to the rules changing makes a point about where the industry is, and where it is heading. Practically an homage to John Carpenter, It Follows is a wonderful film to appreciate if you have a deep and true love for horror. 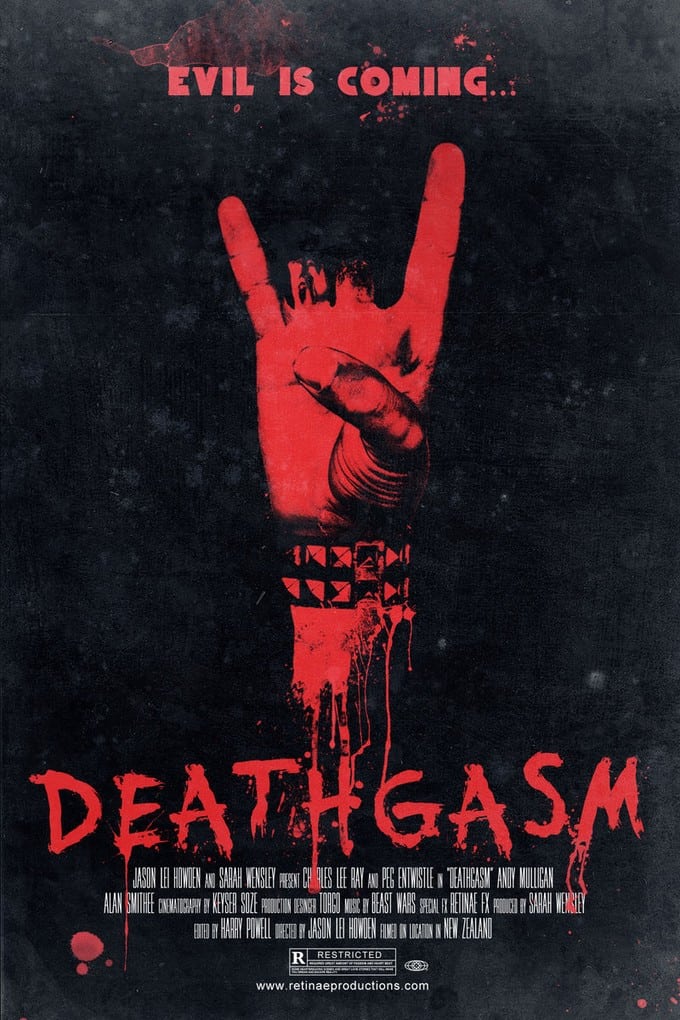 From the far distant land of New Zealand comes a film that is so brutally entertaining, it cannot be contained. Deathgasm follows young Brodie (played by Mile Cawthorn), one of the few metalheads in his small town. When he and his friend discover sheet music, they unwittingly unleash the king of demons upon their small town. It is now up to them to destroy the spirit and save the world. Director Jason Lei Howden does an extraordinary job mixing the horror with comedy to make a masterpiece of horror, metal, and face paint.

#1 We Are Still Here 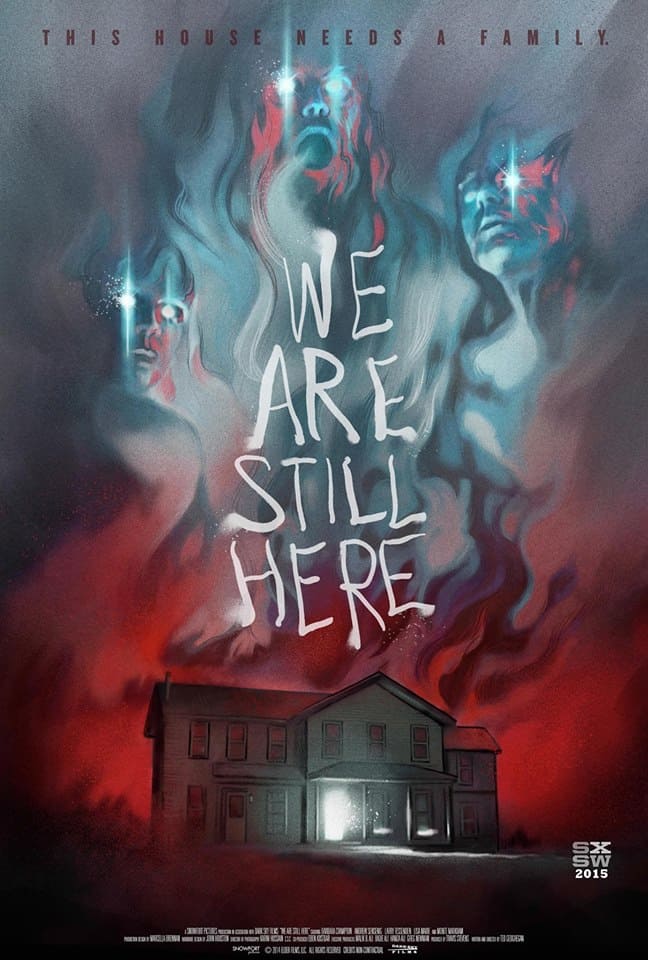 Barbara Crampton stars in Ted Geoghegan’s masterpiece that made the top of the list. We Are Still Here circles Anne (Crampton) and Paul (Andrew Sensenig), a couple who lost their son to a car accident. They move to a quiet New York countryside only to find out they are more than just new neighbors. We don’t want to spoil too much of this phenomenal film, but the cinematography is just decedantly wonderful. Each and every shot is planned out, from the composition to the coloring. This film is intentionally beautiful, and the climax keeps you guessing until the last minute. Truly an engaging, wonderful, terrifying film.

Did we miss any? Do you agree?