As fans of horror, most of us do tend to love Halloween. We also do love to party. And we aren’t too much against Cannibalism in film. Well James Roday of Psych fame, is making his directorial debut with the cannibilistic Halloween party film called Gravy.

An irreverent, daring and wickedly-fun horror comedy, GRAVY walks a perfect line of tension and release, laughs and scares. It’s Halloween night. A trio of costumed misfits with very special dietary requirements seizes a Mexican cantina and force the staff to engage in a late night of gluttony. The only caveat is what’s on the menu…and who will survive til morning!

Gravy looks to be one hell of a good time via it’s trailer released a little over a month ago. Today we have a special clip from the film. The clip solidifies that assumption of the film being a great Halloween treat. 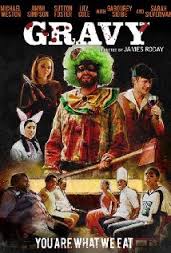 In the midst of all the Halloween anthologies, it will be a refresher to receive such a wild and crazy horror film. If you are going to make a directorial debut matter, why not put the audience through a journey that can leave them laughing and sick all at the same time? We Are Indie Horror is looking forward to the directorial debut of James Roday. Will you be checking out Gravy when it hits theaters on October 2nd or Blu-Ray/DVD/VOD on October 6th? Check out the clip below.

“Kill Or Be Killed” Blends Western And Horror In New Trailer
January 19, 2016