There are two types of people in this world. The ones who know exactly what they want to do with their lives, and the ones who don’t. Those with clear life goals, work tirelessly towards their singular goal while stopping at nothing until they achieve their dream job. The others get to explore several different channels of trades and lifestyles, leaving in their wake a trail of new experiences and life lessons. This week’s Featured FearMaker is a little of both. While childhood dreams of either being an archaeologist or selling hot dogs isn’t quite what Adam de la Cour does today, he has left a trail in his wake by rich experiences and tremendous achievements leading to his current short films, which have been picked up by the always fabulous Troma

Born and raised in Kent, England, Adam de la Cour was raised by an artist mother who at the age of five began to teach him the basics of art. He leaned how to draw perspective, human hands, and several pictures from popular comics such as Transformers and musclemen characters from the Dandy 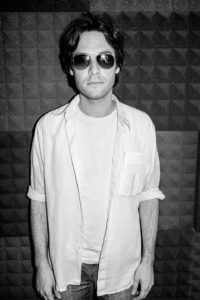 At the age of fourteen, de la Cour unknowingly changed the entire course of his life when he picked up his first electric guitar. Mainly influenced by his fathers cassette tapes of Metallica, Megadeath and AC/DC; music, particularly metal, drew him away from the visual arts. He became obsessed with shredding and would spend hours with his Richie Kotzen and Vinnie Moore, REH, VHS tapes. He also began singing at this point, and had a bizarre audition for the death metal band Necropolis, made up from members of Gomorrah, Atom God, and Asia. “I was a little wet behind the ears to be wearing a goat mask onstage at this point in time.” Says Adam de la Cour

By the age of nineteen, Adam had recorded his first EP, entitled Passing Over, which received good reviews from Guitarist Magazine. He also completed a music degree at the London College of Music, with his principle study being composition.

Adam met several great musicians and composers, as well as studied under the great English composer/performer Michael Finnissy at the University of Southampton. There de la Cour received his PhD in composition in 2006. His portfolio consisted of contemporary classical, experimental, and avant-garde metal alongside various types of graphic scores, including comic books and sculptured objects. He also wrote a large circus theatre piece and invented the alter-ego Benny the Clown, who subsequently became a mainstay in the alternative, theatrical metal band Zipperface, which e la Cour formed in 2005.

After receiving his PhD, Adam de la Cour had several of his pieces performed on several continents while performing with Zipperface in venues like Underworld, Camden, and the Clapham Grand.

In 2013, de la Cour began making films. Something he’d been wanting to do for quite some time, he has made 9 short films which have screened at Whitechapel Gallery, Canterbury Fringe and Supernormal Festival (2015) as part of Exploding Cinema. He has recently made a short film for Troma called Mr Topps, which is set to be released as a special feature on the Return To Return To Nuke ‘Em High Vol. 2 Blu-Ray. Lloyd Kaufman himself plays a part in Mr Topps as well.

As a man with many hats, it is no surprise when it comes to influences, Adam de la Cour has several. His earliest influence came from comic books, particularly the 2000 AD comics, as well as the works of Brian Bolland. udge Dred and the Garbage Pail Kids collectible cards also lent a hand in shaping Adam’s influences.

As most horror aficionados, Adam learned about horror from the local video store. Films like Killer Klowns From Outer Space, Evil Dead 2, and Toxic Avenger jumped out at him, instilling the comedic aspects to horror, and sending him down a path of great B-horror.

There is a famous quote out there and it goes like this, “If you don’t know what you want to do, do everything.” Adam de la Cour has done just that. He is an accomplished comic book creator, musician, composer, filmmaker, and clown. In keeping the future vague, he managed to open himself up to several opportunities, and in doing so has learned a lot. While working in the arts is never easy, Adam has managed to spread himself all over the arts, allowing himself to make what he wants without interruption.