Hell Fire implicitly posits the question, Who’s worse– humanity or the Antichrist? FearMaker Marc Fratto‘s film isn’t one that plays nice in answering that question– and for good reason– seeking to expose the lengths of a violent and turbulent world. One where humanity has seemingly undone itself in a perpetual cycle of violence and decadence. Don’t let this unassuming profundity fool you into believing that this is a zero-fun zone– far from it– Fratto’s film is a bloody good time.

J. Scott Green plays The Antichrist, part charm and part petty neophyte who has settled well with the lowliest forms of humanity in an inescapable world of sex, drugs, and greed. However, he still has a few kinks that he needs to shake off as the Antichrist– learning as he goes, at first struggling to mentally light up a candle, then proving capable as time progresses. As fate would have it, no one could have predicted that he would become entangled with the baddest women on the wrong side of the tracks.

The ragtag group of women, full of complicated and destructive pasts, comprises of Fyre (Katelyn Marie Marshall), Rosetta (Selene Beretta), Destinee (Jennice Carter), and Cinnamon (Kasey Williams). As the Antichrist narrates, in the films inoculating prologue, these women haven’t had the best track record leading up to the events that transpire in this story. Are these women merely the product of their environment? Are they obsequiously tethered to their unfortunate Freudian “daddy issues?” Whatever it maybe, they’re aiming to get some payback on despicable petty criminal, Dark Gable (Chris Davis). 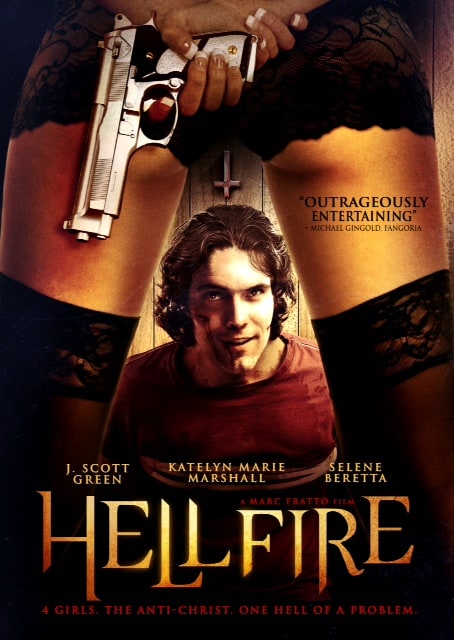 The girls are after a “big score” that is supposed to transpire, and their inquiry with Gable doesn’t go too well culminating in a violent shootout that leaves the Antichrist as the lone male survivor. Fleeing the scene, the girls take the Antichrist to a cabin in the woods and away from the crime scene for a round of brutal questioning. It takes the women some time for them to realize who they have kidnapped and despite their initial reluctance they are soon convinced of The Antichrist’s identity.

With a surefire script full of comical quips and a theological inclination, Hell Fire is one of the most fun and bloodiest horror films to have popped-up in a while. The film captivates from its engrossing first moments, seething with energy and excitement, all the way to the exciting end. At times unrelenting and brutal, writer and director Marc Fratto is in tune with what it takes to make a proper film about the Antichrist in a no-holds-barred blood-fest. The film’s demented and twisted sense of humor recalls classics like “The Evil Dead” and Peter Jackson’s 90s splatter films, but nonetheless, manages to be joyously original, and just like its predecessors, the film doesn’t hold back the blood.

More complex than the film lets on to believe (full of obvious and latent theological implications), Hell Fire is a rampaging good time and a film that can’t help but be anything but charming (appropriately so). Rosetta’s character played by Selene Beretta is a dementedly charming standout proving to be just as sadistic and unrelenting as anyone in the film; she is a thrill to watch.

There are surprises at almost every turn and the moment the film grabs you, it never lets go, proving to be an entertaining joyride from beginning to end. Hell Fire, is an excellent and original take on the Antichrist, doing the story with flair and liveliness, while having a blast in the process. It’s ending wraps up the whole ordeal neatly and manages to please up to its final moments, while the film’s energy never dissipates. Once it all ends, the film leaves its viewer gleefully and devilishly satisfied.

Hell Fire is available for free to all Amazon Prime members and available via DVD and VOD at the links below.

EXCLUSIVE CLIP: The Witch Will Go Satanic On Your God Fearing Souls
February 8, 2016