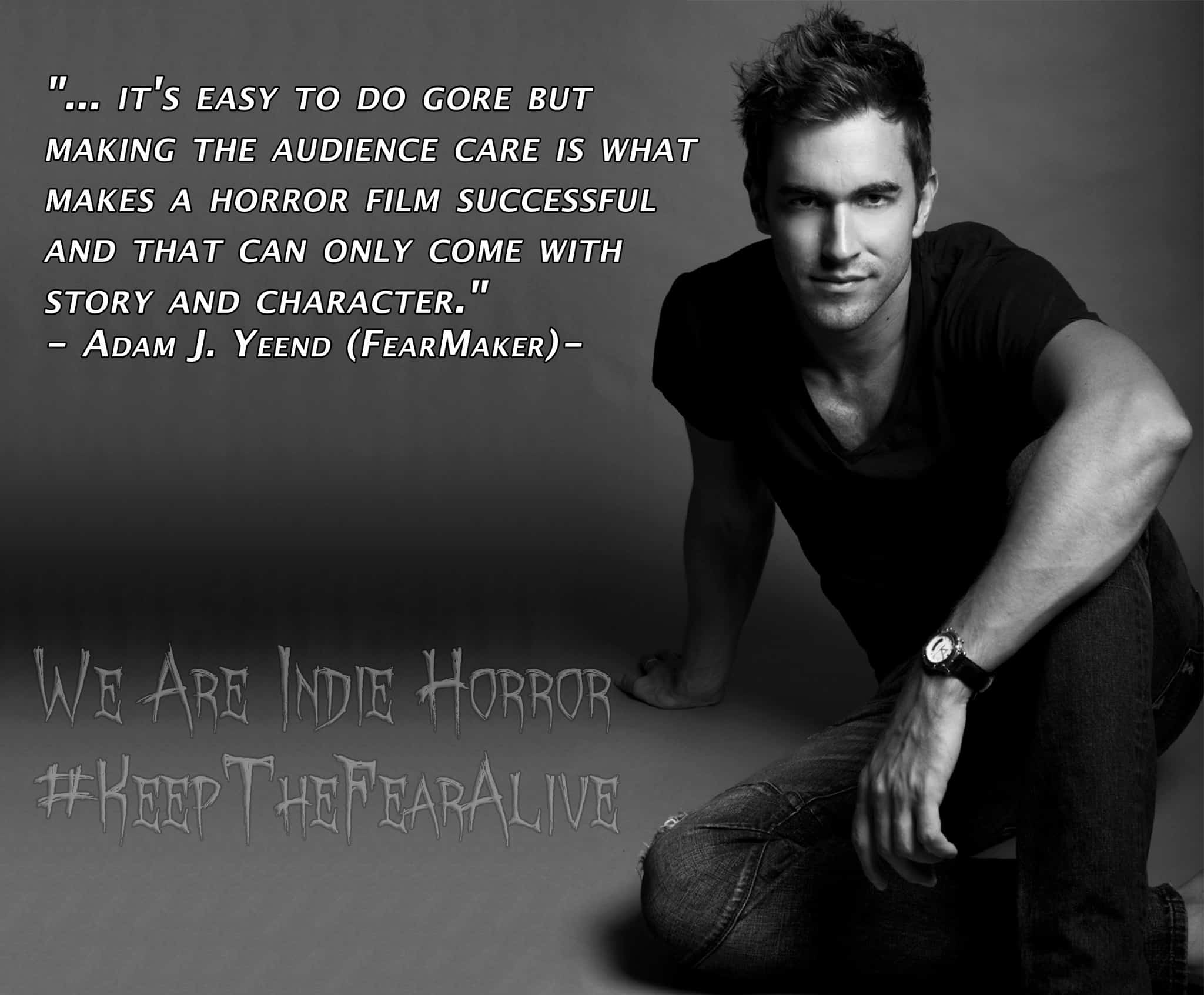 We’re heading into the second week of November, which leads to cold winters ahead, unless you live in the southern hemisphere. If that’s the case… welcome to summer. This weeks featured fear maker is originally from down under where it is hot in December, but now he’s making waves in Los Angeles, California; where it’s not as hot in December.

Born and raised in the Blue Mountains west of Sydney, Australia, Adam J. Yeend has always had a love affair with film. One of his earliest memories comes from his hometown of Springwood (no, not that Springwood) where he found himself in the local video store mesmerized by the cover art in the horror section. Despite his attraction to the genre, Adam was not allowed to watch scary movies for fear of keeping his parents up due to nightmares.

Adam still found his horror fix with more family friendly titles such as Beetlejuice, Return to Oz, Willow, and Batman Returns. These titles, paired with the sci-fi adventure high that can only come from watching Jean-Luc Picard aboard the USS Enterprise in Ster Trek, fueled Adam’s creativity. It was, however, Wes Craven’s Scream that introduced Adam to the greatness of the horror genre. From that point he would grab anything he could to watch, catching up on decades of film.

After graduating college, Adam began working on his acting career, taking classes from John Noble of Fringe and Lord of the Rings fame, as well as Lynette Sheldon. While in Austalia, Adam piled up a laundry list of stage credits with the occasional guest TV spot. It was not until he got his US green card and moved to Los Angeles where “the real battle and fun began.”

When the big move occurred, Adam worked a few roles including one alongside Lindsay Lohan. He also flew out to Tokyo to work with Hamish Downie on An American Piano and also performed on stage in Holding the Man directed by legendary acting coach and director Larry Moss. Although Adam’s acting career was fruitful; he had a different path in mind.  “I didn’t want my life to just be about auditions which is how it was becoming…”Adam’s producing career began out of necessity. As great as it was earning all these dramatic roles, it did not compare to working on a quality sci-fi or horror/thriller.

It was actor and producer Ryan Dillon who introduced Adam to a young group of filmmakers, which led to his involvement in the independent horror short film Skypmare directed by John Fitzpatrick. This film began a long relationship between Adam and John. “I think we all have similar tastes, our director John Fitzpatrick is a highly experienced editor and as the director of our projects, I trust him 100% because he knows horror so well and is full of pretty messed up ideas for stories, and I say that affectionately”

Adam J. Yeend has since been working hard side by side with John Fitzpatrick and fellow producers Sarah Fitzpatrick and Ryan Dillion on Brentwood Strangler, a horror short film which is set to premiere in Australia next month. They have also been hard at work running their monthly horror short project, Scary Endings. Every month, Scary Endings releases a new original horror short. Currently on their fifth episode, these short films have been praised by many, and they keep getting better.

Overall Adam J. Yeend is a hard working man whose managed to surround himself with nothing but the best. You can follow Adam and his many projects by clicking on the links below.