Part two of our journey into the Featured FearMakers of 2016 takes us from April to June. 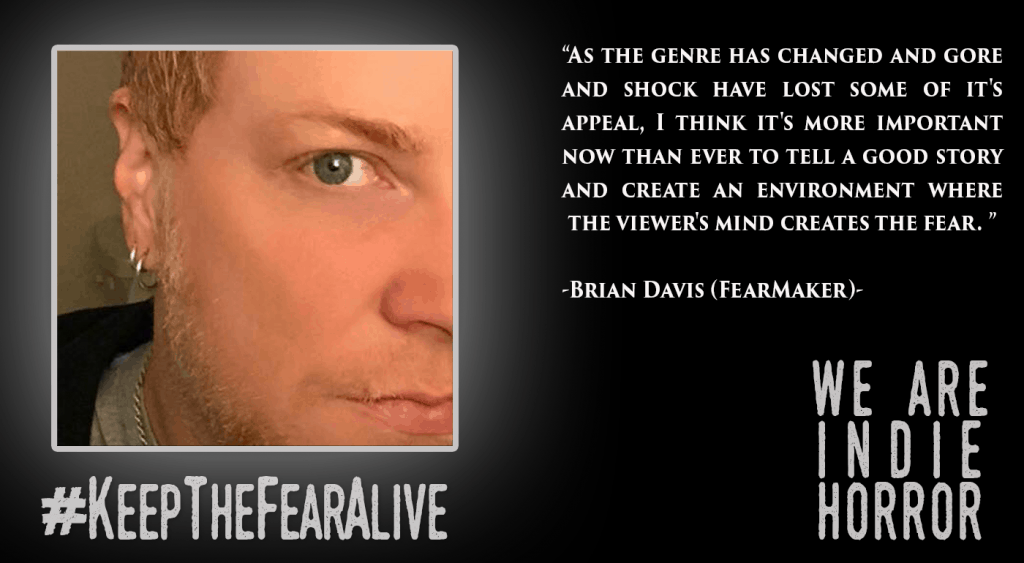 Born and raised in Houston, Texas, Brian has always had a love affair with the horror genre. Ever since first watching John Carpenter’s Halloween at the age of eight, he has been fascinated by the genre. It was the 80’s horror that really turned him into a fan. “I simply liked the uneasy feeling and the anticipation.” Brian has been a professional musician, specifically drumming, since he was 19 years old. His path to filmmaking came through his work providing music for haunted attractions. This segued in into a career scoring short films. Along with some friends, Brian started Grave Tone Productions, a company designed specifically to score horror films. 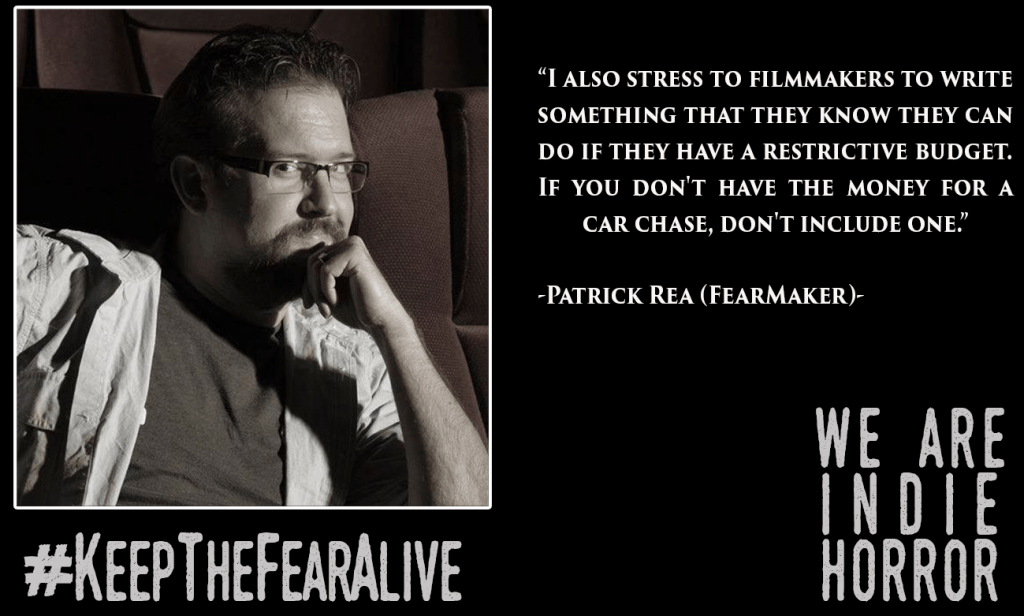 When it comes to making films, Patrick has a long list of credits, with many accomplishments. He began making short films back in 2002. He worked in collaboration with Ryan Jones and Josh Robison to create the company SenoReality Pictures. With this company, Patrick would go on to make several award-winning films, including winning Fangoria’s Blood Drive and being featured on Chiller TV Rea’s stylized short films have screened in over a hundred film festivals around the world. In the summer of 2008, Rea‘s short film Woman’s Intuition won a Heartland Emmy Award. In 2009, Patrick was co-director on the Jake Johanssen, I Love You comedy special, which aired on Showtime throughout 2010. SenoReality Pictures won its second Heartland Emmy Award with their short Get Off My Porch. He has also been nominated for two Mid-America Emmy Awards. 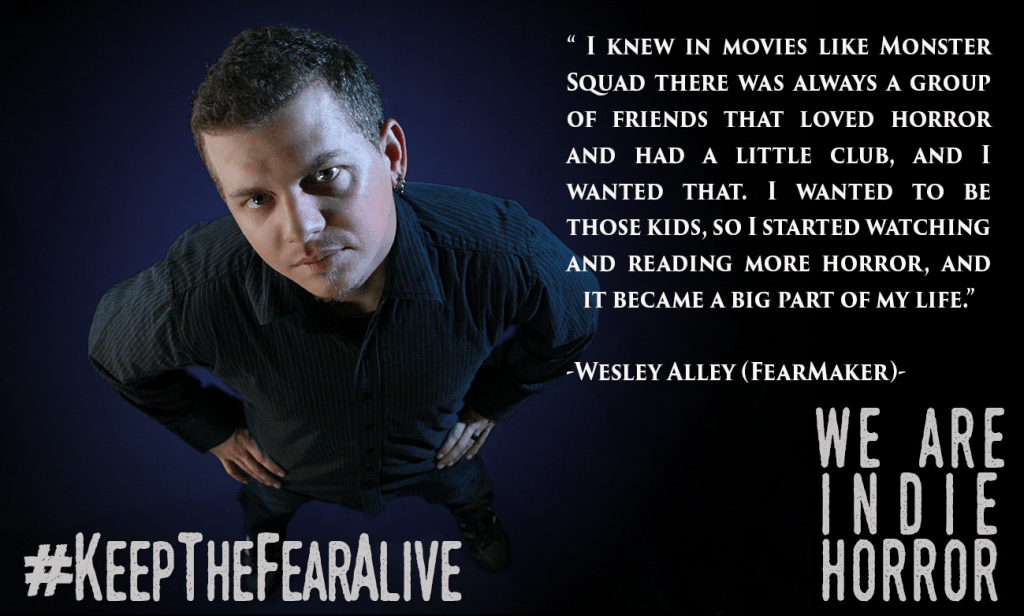 While working on one show, in particular, Kevin Smith’s Spoilers which aired exclusively on Hulu, Wesley received some crucial advice from the fat man Kevin Smith. “He told me that the hardest thing for me was going to be to get people to think of me as Wesley the Director, not Wesley the gaffer.” An issue with many aspiring filmmakers in Hollywood, just as easy as it is for actors to be typecast, the same can happen to crew members. The next day Wesley set out to make a path for himself as a director. He created a Facebook fan page and accrued a small fan base made up of friends and family to help push Wesley the Director. From then on, Wesley the Director was in full effect. He began making short films, commercials, and music videos with friends and is currently underway producing an anthology, which will be announced in the coming months. 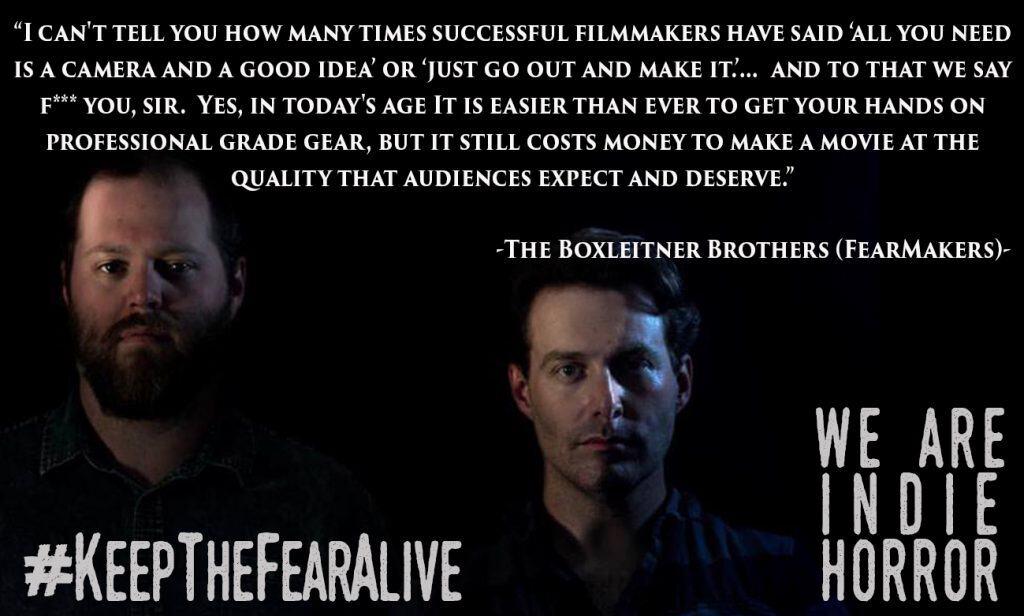 Sam and Lee Boxleitner have a unique style, making low budget films and giving them millions of dollars worth of production value. A lot of this lies in their camera work, as well as spot on actors (including both brothers) and some truly disturbing stories, all while maintaining a certain level of camp and humor. Their first film together, Las Duelistas, is an homage to classic kung fu films, in which a master and student battle by way of rock, paper, scissors. The film is a stepping stone to what the brothers can achieve. While not their most excellent work, the beginnings of their style are apparent, and the humor and gore are definitely there. The film stars Charlotte Waters and Andrea Steele, who would later work on Boxleitner films as costume designer and makeup respectively. 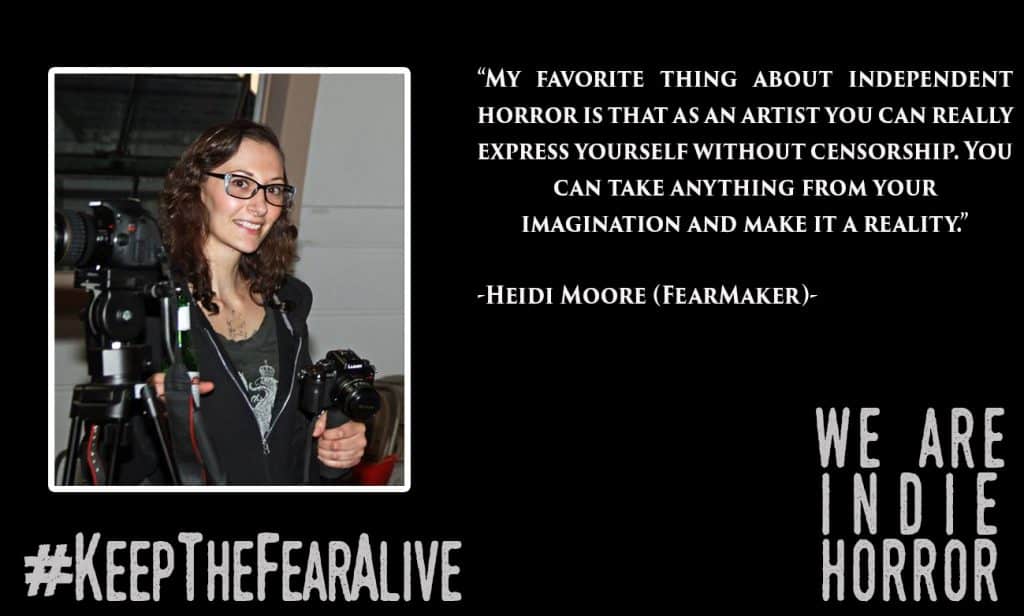 Heidi Moore started her own production company Wretched Productions, with the hopes of making films, her own way. Much like former Featured FearMaker Lindsay Denniberg, Heidi‘s films have a provocative, retro feeling, wearing her ultra-low budget badge with pride. Her films, while not always horror, have a distinct voice unique to Moore. She tells interesting stories with an emphasis on the important things such as blood and sex. B-horror at it’s finest, Heidi’s films are fun and out of this world.

May 9 – Jimmy H aka Mudd The Magnificent 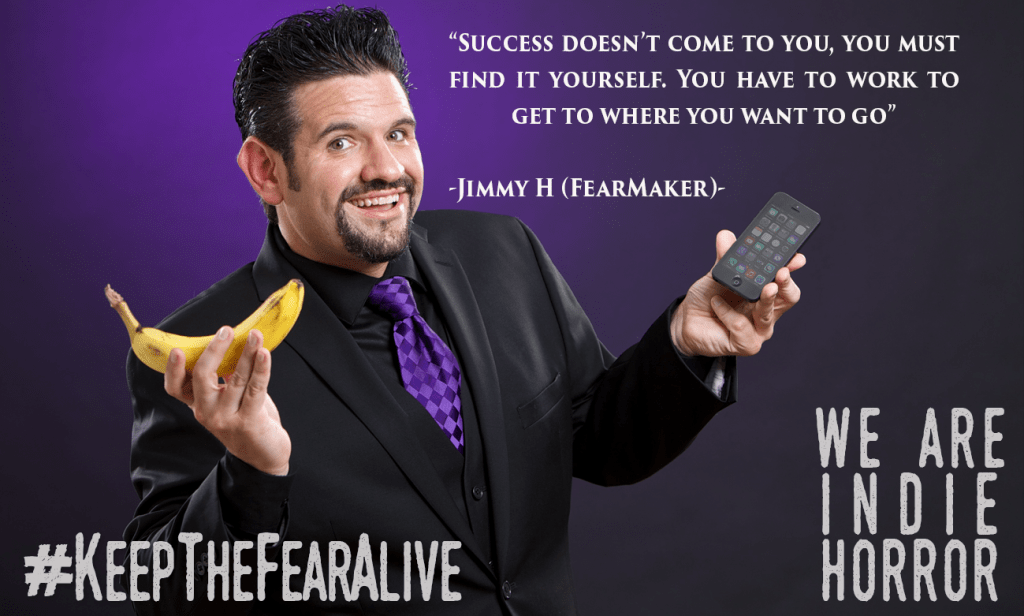 Having created an excellent career as a magician, Jimmy decided to follow his other dream of working as a scareactor. “Mudd was born out of my love for horror and the haunt industry. He [Mudd] is inspired by such greats as Freddy, Beetlejuice, Lon Chaney, and the King himself Elvis Presley. After the first few years of being a scare actor at the annual Queen Mary’s Dark Harbor in Long Beach, CA, I saw the opportunity of marrying my loves of being a magician and a monster.” Mudd has since taken a character of his own, appearing at several haunt events, including ScareLA and The Hollywood Fringe Festival. This summer you can find him roaming the halls at Midsummer Scream at the Long Beach convention center. 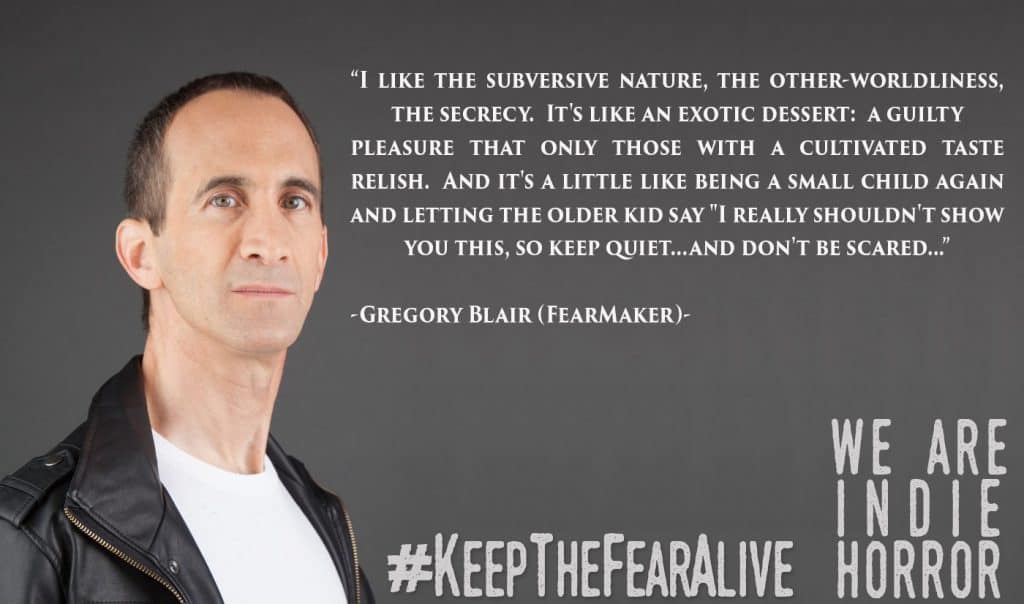 Aside from working as a stage and screen actor, Gregory Blair is also an accomplished novelist, earning himself a Stonewall Award for “Spewing Pulp.” Other written works attributed to Blair include “The Ritual”, and “Little Shivers” as well as the stage plays Cold Lang Syne and Nicholas Nickleby. Aside from writing for the stage, Blair also has an accomplished screenwriting career, penning the award-winning Deadly Revisions, which stars Bill Oberst, Jr. which was also the directorial debut for Blair. 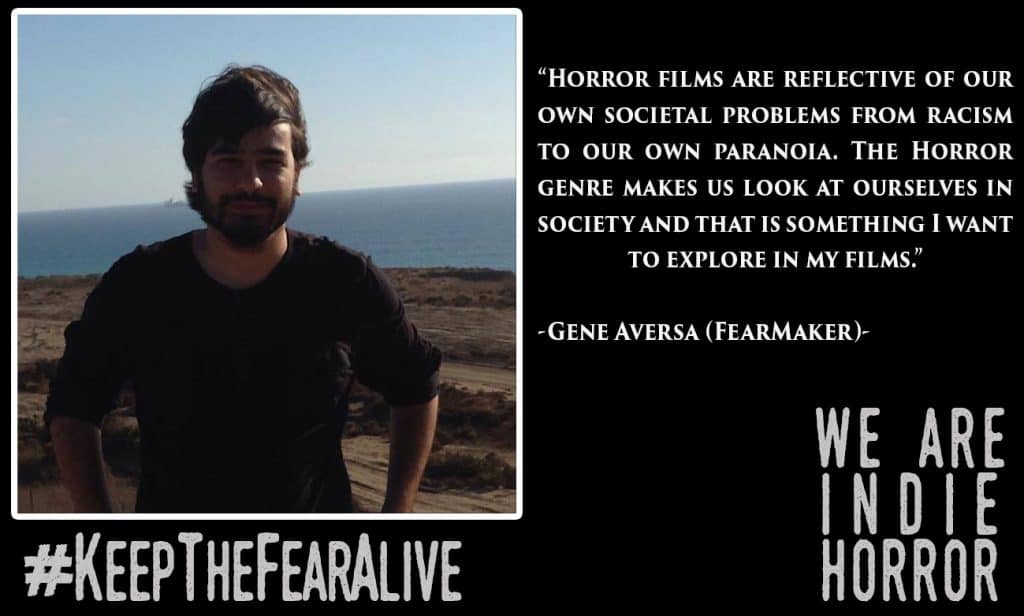 Born and raised in the small town of Whittier, California, nestled in the greater Los Angeles County, Gene found his passion for horror films at a young age. Listening to scary stories as told by his family and friends was his first introduction to the genre. Horror films were an obvious extension to the stories, watching films from George Romero, John Carpenter, and Ridley Scott and virtually taking notes. It was, however, the classic Ash-tastic Evil Dead that grabbed ahold of the young Gene and gave him the inspiration to become a filmmaker. “Raimi’s Evil Dead films have greatly influenced my own style of filmmaking replicating shots and style from the film” Along with Raimi, Stanley Kubrick, and George Romero are two big influences on Gene’s career. 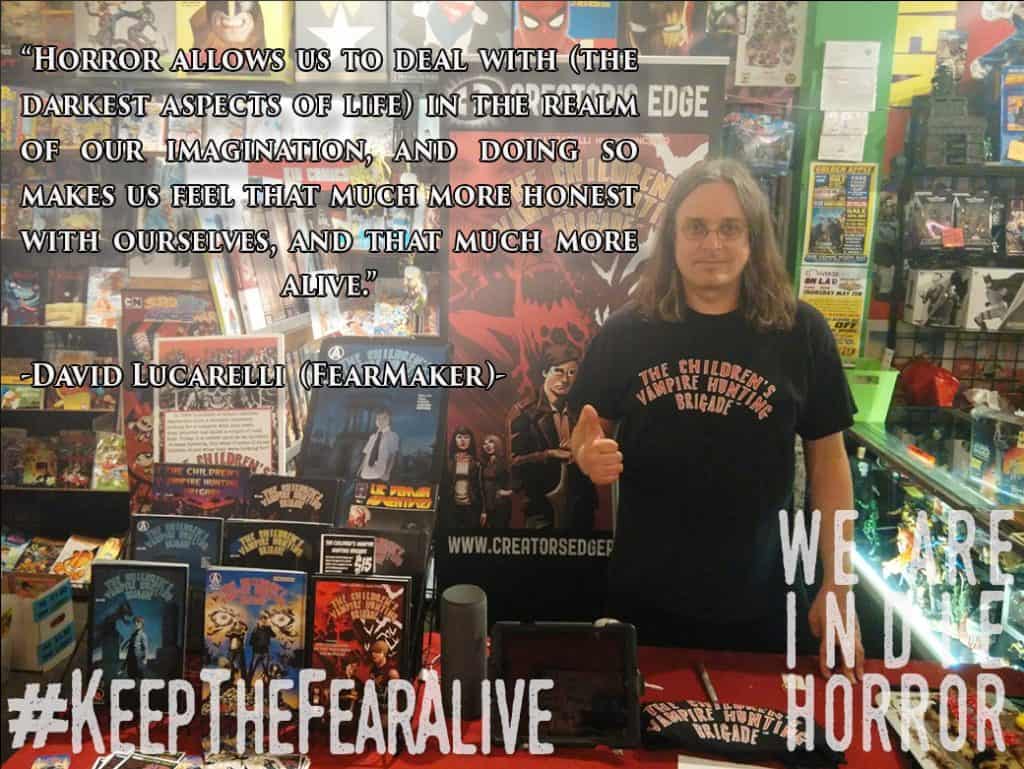 Being an independent comic book creator is not easy in this modern age. The influx of new creators has saturated the market, as has every platform in recent years. It is now harder than ever to stand out and make your project known, but David knows that it still takes one person at a time to grow a following. “[At conventions] you are competing with sometimes hundreds of other dealers for customers that by the time they get to your booth are suffering from sensory overload. You have to learn to fine tune your short and medium pitches and accept the fact that some people are going to love what you do, and others will be completely indifferent, and that’s OK too. “ 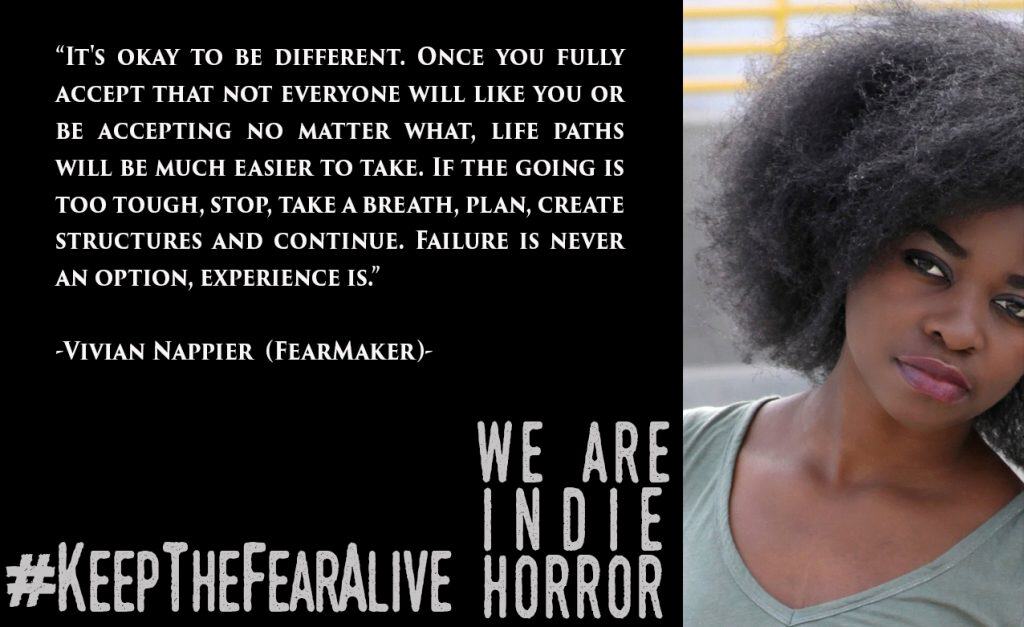 In 2012, Nappier began writing and directing short films, releasing a total of four short films. In June 2012 of the same year, Vivian received her first film nomination from the Nollywood African Film Critics Award (NAFCA) for “Best Short Film” from an African. Nappier also has several international modeling successes to her name, Customer Advisory Awards, and Diploma in Journalism and Acting.

Since then Vivian has been hard at work creating more meaningful, dark films. Her latest short film, Sweet Redemption, tells the chilling story of a woman about to die from lethal injection giving her last words. Those words, however, give new beginnings to those who listen. The film was shot with virtually no budget and took around 8 hours to shoot. We thought the Scary Endings team had it hard making a short film in a month, but Vivian and her crew have them beat. Lead actress Lauren J. Daggett carries the film on her shoulders and does so with grace and finesse. Her speech is deep rooted and brilliant, taking Vivian’s words and giving them a genuine touch of reality. We don’t know what she did to deserve the death penalty but based on her delivery, it was horrific, and she is not at all apologetic 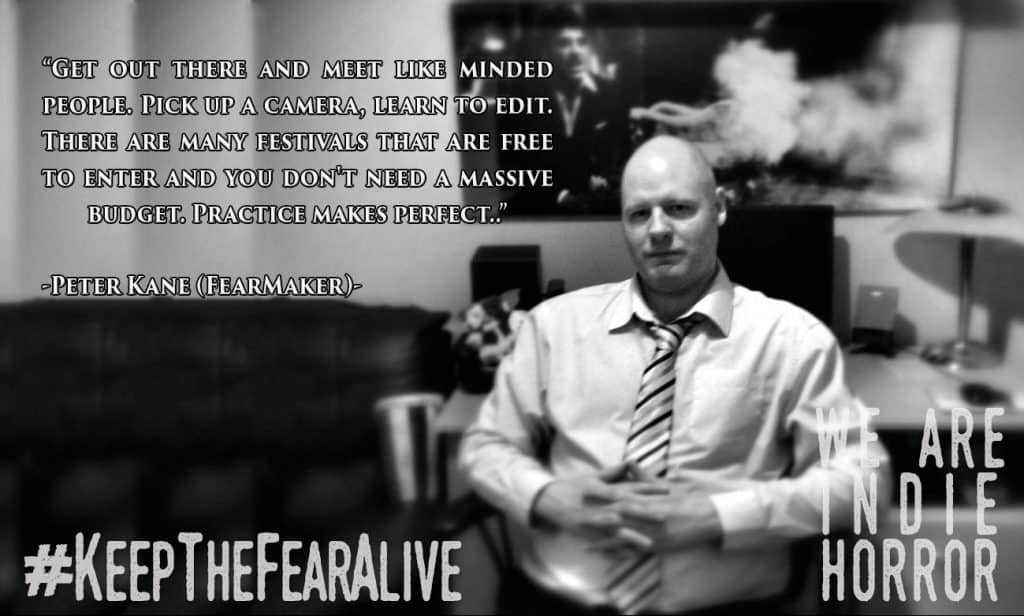 In September 2013, Peter Kane founded his production company, Wandering Kane Productions, with his production mate Jimmy Hagri. The concept was to make interesting films while hiring local actors and crew from around the North East. They promptly began working on their flagship film, The Gamekeeper. “I never really set out to make horror movies but I was having a look around an estate in Chester Le Street with some old production partners and the guy showing us about said the gamekeeper was knocking about and to be careful as he can shoot on sight – that moment inspired my to write The Gamekeeper “ 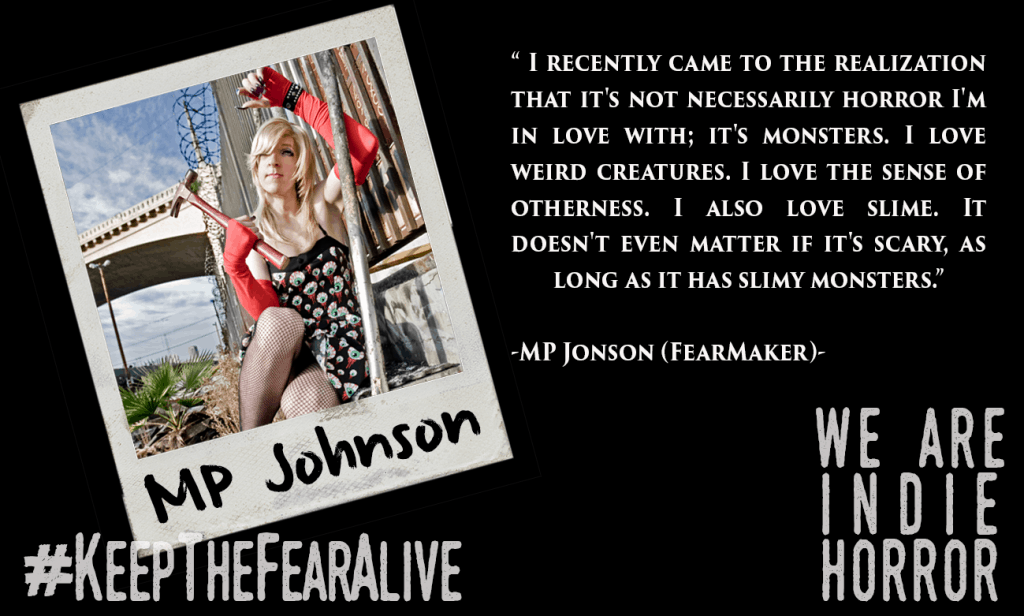 Johnson created his own zine, Freak Tension, in 1998. He filled the pages with true life adventure stories, music reviews, band interviews and short fiction. This turned into a full career as a writer, completing several books and short stories, including his award-winning Dungeons & Drag Queens

MP Johnson has released several long format novels, as well as collections of short stories. Inspired by writers like Clive Barker, William S. Burroughs, and Kathy Acker. His bizarro, horror, science fiction stories have been entertaining readers since 1998. His debut book, The After-Life Story of Pork Knuckles Malone, was released in 2013 by Bizarro Pulp Press. His second book, Dungeons and Drag Queens, was released in 2014 from Eraserhead Press. Johnson has had his work released in over 45 publications since then. 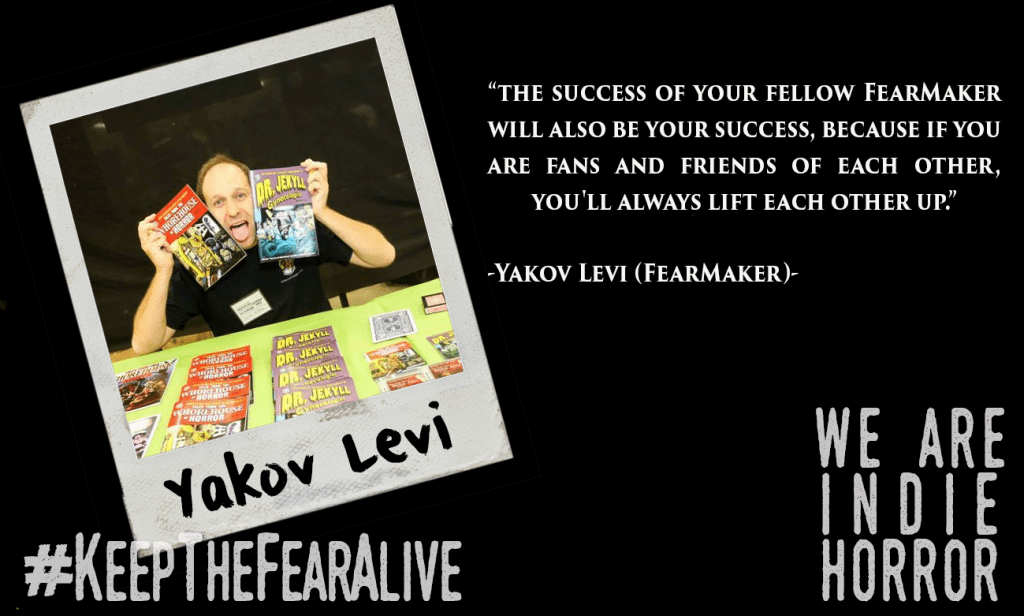 Inspired by the Twilight Zone, H.P. Lovecraft, 1950s EC horror comics like Tales from the Crypt, Yakov Levi got his start making films. Yakov Levi Films specialized in tasteless horror, starring real-life Ukranian prostitutes and pimps. These films culminated into the feature length hameless, Tasteless: Trash Cinema From The Soviet Underground. The films were picked up and distributed by Troma, giving Levi the first chance to show the world what his twisted mind has to offer. These films would become the inspiration for Whorror Comix, particularly one woman, Baba Alla, Ukraine’s oldest and ugliest prostitute, who would become the inspiration for the hostess of Whorror Comix.