There is something in the air this year, quite a firey stench surrounding the indie horror scene. It seems to be the brimstone rising from the world below. Every week a new film is released that deals with the devil and occultist ideas. Coming out of Ireland is the latest in occultist horror and damn it delivers with a dark and powerful punch. A Dark Song will stand tall in this year’s trend of horror. 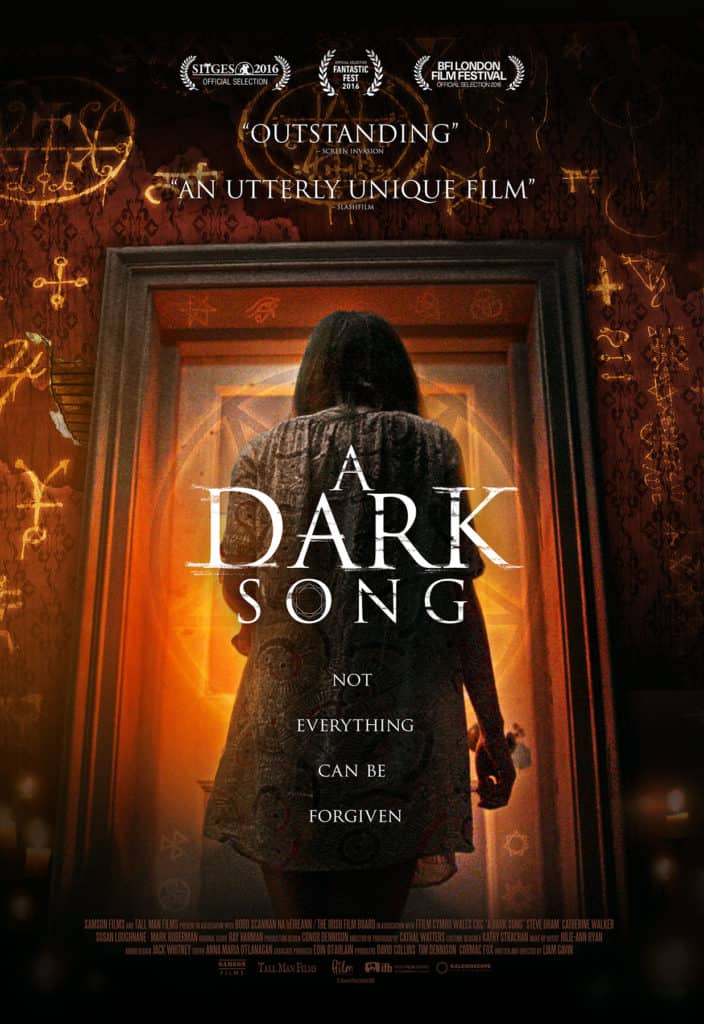 A determined young woman and a damaged occultist risk their lives and souls to perform a dangerous ritual that will grant them what they want.

To explain any more would be a sin against the film and the intensity it shares with the audience. The story itself provides an incredibly intimate atmosphere where the audience is locked inside the house with the two main characters as they explore a dark ritual. As we all know magic comes with a price, especially dark magic.  As you find out quickly, this film is a slow burner but well worth it. The story progresses along with each and every scene allowing for the slower pacing to create an atmosphere that builds up the terror until your eyes are glued wide open to the screen.

A Dark Song is truly a character piece. A desperate woman led by a broken man each trying to gain what they want. Steve Oram and Catherine Walker provide spectacular performances. Working off of each other and providing new subtleties to each other’s characters with every progressing moment. Any film with phenomenal performances like this, the credit belongs to the actors along with the director and writer. Liam Gavin, writer and director for A Dark Song, knew what punches he was pulling. In choosing his cast and writing the words he did, he was able to pull the best from both Oram and Walker

Along with stellar performances, the music provided by Ray Harmen adds to the already tense and claustrophobic situation. With its own unique sound and perfect accompaniment, the music itself feels like its own character throughout the story.

To tell you any more would spoil the fun with this slow burn intense occult film. A Dark Song truly impresses on all things many modern horror lacks, script and performances. Liam Gavin locks you away into a house with two characters and forces you to learn all you can so you can survive the tense and claustrophobic nature of the situation.

Although not for everyone, A Dark Song is an early contender to be put on the 2017 best of list. You can catch it on April 28. For more information be sure to check out the FACEBOOK

‘Get My Gun’ Interview with Director Brian Darwas and Producer Jennifer Charchetta
March 9, 2017
Terrifying Aliens In Space in “Dédalo” From Portugal Now Streaming Online!
May 26, 2016