Who doesn’t love the independent filmmaker that will do anything to get the film made, including writing, starring, 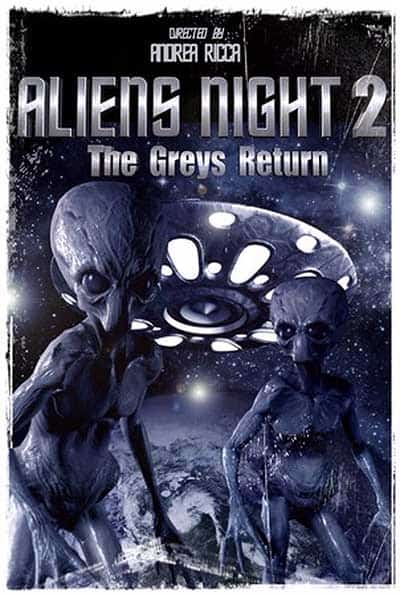 directing, 3-D modeling, editing, and sound design? Andrea Ricca is a self made filmmaker with over 20 films completed with just an HD camera and a computer. His newest offering Aliens Night 2 is a hilarious four minute sci-fi short about an alien encounter. When an alien saucer appears outside of the window, the hero snaps a photo with his cell phone alerting the creatures inside.

The Greys get more than they bargained for in this fun sequel. It’s a little more light hearted than the first film, utilizing comedy in lieu of tension. Like many of his shorts, Aliens Night 2 has no dialogue, which showcases Ricca’s talent as a storyteller. He uses imagery and sound to drive the viewer through his story. He makes these films on zero budget, but what he lacks in cash he makes up for with creativity, passion, and hard work. His CGI and VFX allow Ricca to operate with no crew and a small cast. He makes good use of simple filmmaking techniques that make his work look and feel cohesive. It’s inspiring to see this kind of dedication. The time, the sweat, the tears. Riccableeds for his work and his vision is clear. He is the sole animator, compositor, and all of the post production on his films. One can only imagine the hours spent cutting footage, animating, texturing, the time devouring render and rasterizing processes that there are not enough sad emoji’s in the world to describe. At the end of it all there are filmmakers who wade in the trenches of their vision, and the passion to make it alone.

Aliens Night 2 is Andrea Ricca’s fifth film of 2016. It’s clear Ricca is a masterful storyteller and has no plans on stopping. Ricca’s career spans the last 18 years and his YouTube channel sports over 11 million views. Expect more from the lone filmmaker.  His films can be found on his official YouTube channel. You can also check out his official website for more information and a full filmography of his work.