As we say goodbye to February, we also say goodbye to Women In Horror Month. We’ve featured women all month long as our Featured FearMakers, and one thing we would like to point out the work these women have done is not only for themselves but raising the community around them. We did not pick these women just because they work with their community, they are just that badass. This week we celebrate a woman whose passion for horror came from tragedy, and her writing has helped her shuffle through the darkness to the light at the end of the tunnel. Lisa Vasquez is a horror author, and she is this week’s Featured FearMaker.

Horror has been a part of Lisa Vasquez’s life every since she was 2 years old. Her step-father was a huge fan of Special FX and classic studio horror movies. By the age of 5, they were sitting through Saturday matinees of Godzilla and Spectreman and movies at home on his projector of The Wolfman, Dracula, The Mummy, Frankenstein, and more. Halloween involved the whole year of planning and putting together costumes from scratch.

At the age of four, Lisa found solace in her writing when she found out her step-father was terminally ill. Finding an escape in her stories and make-believe worlds, she discovered a new passion and nurtured it through short stories, poems, and storytelling with roleplay, both table top and online. This newfound passion has led her to a career as a novelist. 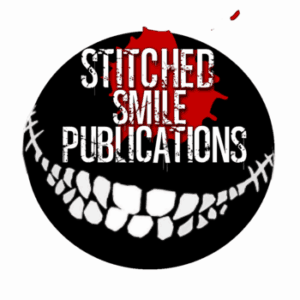 By design, Lisa Vasquez creates horror with vivid, dark, and twisted words and images that not only drags the reader in between the pages but onto the covers that house them, as well. When she releases her grasp, readers are left alone to sort through the aftermath those images leave behind; each one becoming a seed that roots itself within the soft confines of their psyche. She takes this passion for writing horror and uses it to mentor other authors and volunteers as the Publisher’s Liaison for the Horror Writers Association. In January 2016, Lisa took her commitment to the next level and opened an independent publishing house, Stitched Smile Publications

Stiched Smile Publications is an artist-run publication firm that gives the authors complete control over their works. They help up and coming authors with mentorships, first class editing, and a hands-on distribution strategy including cover designs, book trailers, and a street team to help get the word out. In the last year, they have expanded to the YA Division, the SSP Comics Division, Audio Books, the SSP Magazine, and their Dark Persuasion (dark erotica) Division.

Her own writing has seen success, as she sells her books on Amazon. It is a tough and grueling process to have a book published, and with the advances set forth by Amazon, there is some good and bad. While it is easier to publish nowadays, it opens the doors to writers who might be rough around the edges, or just plain bad. The budget for an indie author is usually minimal, and they are generally the last person to get paid.

Despite the fact that she makes little money, Lisa Vasquez is a hard working, diligent, and her new book, The Unfleshed: Tale of the Autopsic Bride, is currently available for only $4.99. Her hard work and determination to not only her craft, but her community as a whole is inspiring. We look forward to more work from Lisa and her awesome community at Stiched Smile