Christmas horror is a rare breed; a hybrid beast that peaks its ugly head not often enough. Nevertheless, this type of film juxtaposes the macabre of the unknown and the terrifying with the joyful spirit of Christmas. The setting of Christmas is what is so offsetting, a holiday generally associated with pleasantries and the act of giving. By setting a horror film during brightly decorated neighborhoods and family gatherings, the audience is caught off guard, psychologically believing that nothing could go wrong. And of course what could go wrong, evil has to take some time off, right? There is a reason why the great Alfred Hitchcock set some of his most effective thrillers during the day– that feeling the audience shelters itself in, that nothing bad can happen in the day time, with things only going bump in the night, is a fallacy that Hitchcock excellently exploited. 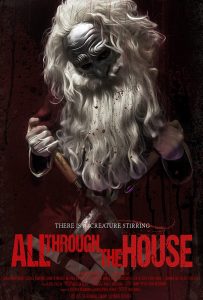 Well, in a culture that throws around the cliche “where is your Christmas spirit?” to those less inclined to feel as festive during the holidays, it is no surprise that the Christmas horror film is as elusive as it is. That being said, All Through the House is just what we needed this holiday season, definitely Christmas in spirit and one-hundred percent horror.

All Through the House is an award winning film by filmmaker and featured FearMaker Todd Nunes, which premiered Halloween 2015 at the RIP Horror International Film Festival in Hollywood. The film went on to win Best Slasher, Best Editing, and the Audience Choice Award while also snagging an additional two nominations for Best Ensemble and Best Musical Score. The film is released by The Readmond Company.

The film follows Rachel Kimmel (Ashley Mary Nunes, director Todd Nunes’ sister) returning home for the holidays to spend some time with her friends and grandmother, but things turn sour when a vicious killer, the santa-slayer, lurks in the town of Napa, California and invades unsuspecting homes with murderous intent. With an eerie mask and a pair of garden sheers, the santa-slayer is relentless and brutal in his methods. Oh, and if you’re of the male persuasion prepare to wince at a series of bloody castrations. 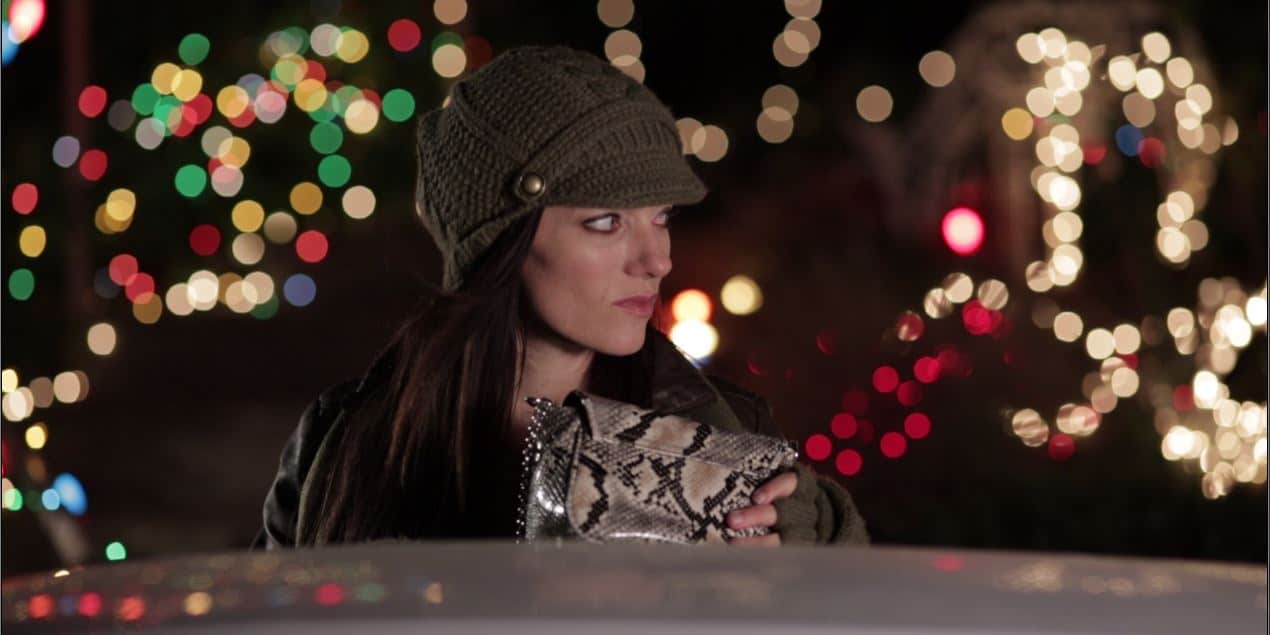 But apart from a rampant murderer, there’s also the pesky, town kook, Mrs. Garrett (Melynda Kiring) who’s a little too obsessed with Christmas and holds a bit of infamy in town for the seclusion she imposed on her young daughter who went missing years ago. Kudos to Melynda Kiring, as the weird neighbor, she was magnificent to watch. Rachel, the nice girl she is, is stuck helping Mrs. Garrett for the night, and forces her friends to help out.

All Through the House, is far from a mere slasher film. Many slashers offer, what appear to be vignettes of loosely linked deaths, with no real purpose, but ultimately there is a masterful plan and sinister scheme behind All Through the House, allowing the film to stand out over the rest. The driving force behind the killings, which are satisfying in their own right, come to fruition as the mystery begins to unfold revealing details from the past, effaced with lies and deception.In fact, as haphazard as the death’s may appear, by the end of it all, everything comes together perfectly with lucid clarification that justifies, in cinematic terms, what is happening on screen.

All Through the House isn’t all just fun and games. The killer’s main goal isn’t just killing women, but also castrating men, injecting the film with Freudian implications in the process. All this comes into play in the third act, of course, once the mystery of the film is exposed. But saying anymore would be revealing too much of the plot and the film’s mystery. 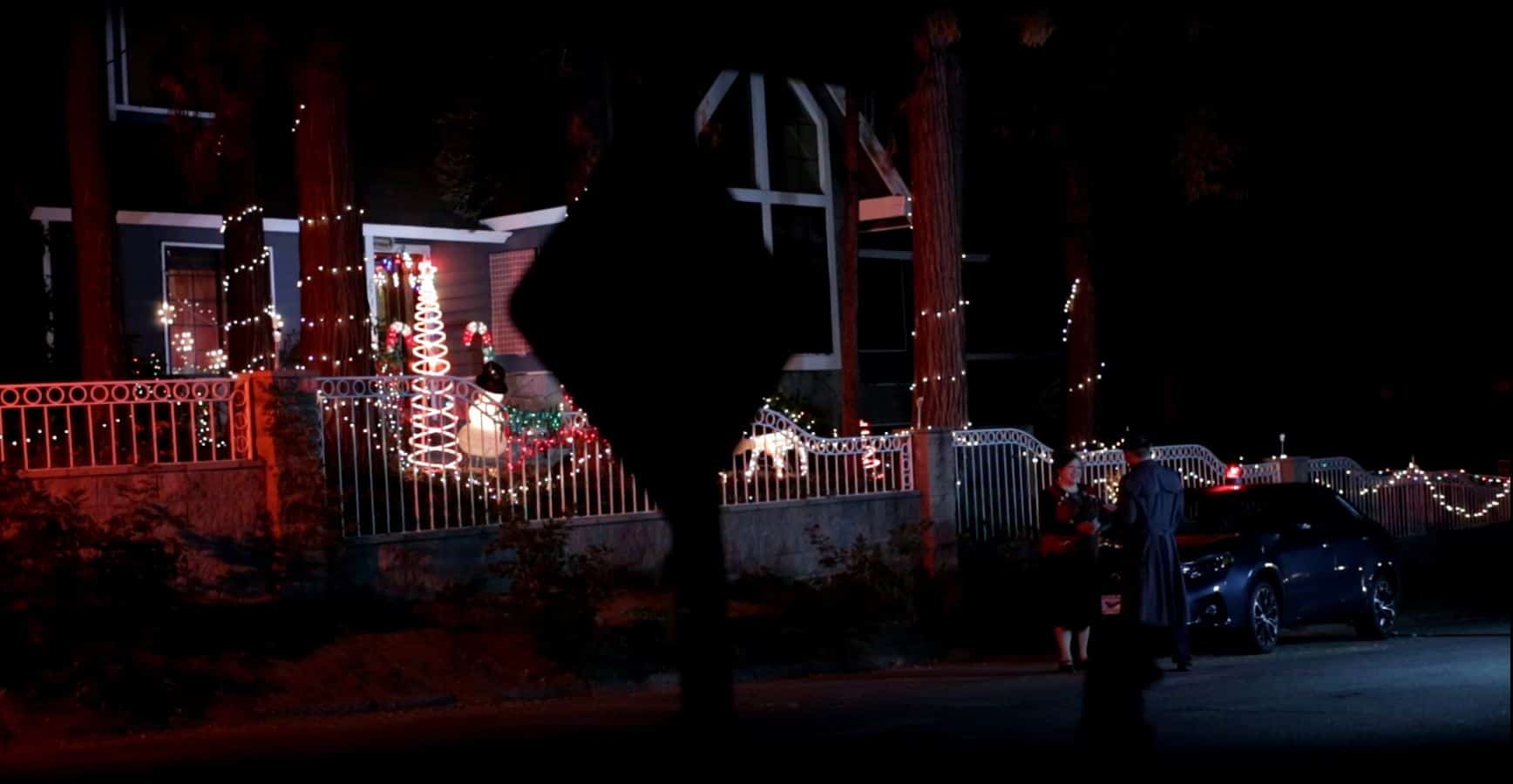 All Through the House is written and directed by Todd Nunes and his film is filled with gory special effects by Tommy Pietch. The blood factor is high, so gorehounds rejoice, and prepare to go places you don’t want to imagine– your thirst shall be most definitely quenched. In what I am hoping is a reference to one of my favorite, most overlooked slasher films from the 80s, the garden sheers remind me of the killer’s weapon in the The Burning. The santa-slayer is definitely adept in the usage of gardening equipment, in this no-holds barred 80’s throwback to classic slashers from the heyday of the subgenre. The film is both a bloody good time and a well crafted story, in the guise of a straightforward slasher– prepare to be pleasantly surprised.