(October 6, 2015) – In The Dark is one of the many horror films being released today for INDIE HORROR DAY, and We Are Indie Horror had a chance to watch it early.

In The Dark is an anthology, surrounding two “cold blooded killers” as the characters describe themselves. The two ladies find a bag of old VHS tapes in a motel room with a VCR player. The tapes they pull out are Keeper and To Be Loved, both directed by Chris St. Croix, and Dummy directed by David Buchert, who also directed the wrap around story. Each film feels very different from the last, but all have the same underlying theme; judgment for your sins. Three short films, three different horror genres. One dark and gritty monster fest, one classic slasher with a twist, and the other as a B-movie grind house gore-fest. Overall, the film takes a very modern Creepshow vibe, which is how horror anthologies should feel.

“Its darkness envelopes, surrounds you so cold.

A place where the most nightmarish stories are told.

There is no escape as fear pierces your heart.

For anything can happen…In The Dark.”

In The Dark is wonderfully diverse and manages to reach out into several sub-genres within horror, as if there were four different directors working on the film. St. Croix and Buchert manage to fool you into thinking that they had a studio-sized budget with offices somewhere in Hollywood (or probably Burbank). But in fact, the entire film was shot in their home state of Tennessee, where a film industry is starting to take shape. These two are showing that great films can come out of anywhere, not just Los Angeles, New York, Vancouver, or Georgia. With the right kind of determination, and a good supportive team (and hopefully some investors), you can tell one hell of a story; or four.

We spoke with Chris St, Croix and David Buchert a few nights ago over the phone, and they shed some light on the inner workings of In The Dark, and discussed film making in Tennessee. What follows are bits and pieces from the long and insightful conversation with the films’ creators.

WAIH: Where did your love for horror begin?

St. Croix: You got me into this, you start.

Buchert: OK so, as a kid everything terrified me. I was friends with some people who had cable, and every time they’d turn on horror movies I’d want to leave the room, I couldn’t handle it. At 13 everything changed. I saw Evil Dead and I knew what I wanted to do. Leading up to that my dad was super cool, and if there was movies I’d want to see, he’d record it off of cable and leave out all the language and nudity. So that’s how I saw movies like The Thing, American Werewolf in London, big 80’s movies.

St. Croix: His father would cut the stuff out, that’s amazing.

Buchert: The thing was, Evil Dead, that was the scariest movie I’d ever seen. I look back on it and I see the humor now, but it was so far from funny when I saw it, and for me, when I saw the credits and it said Tennessee and Michigan. Between Evil Dead and another movie called The Alien Factor that was shot in Baltimore, those two movies actually made me think I could make a movie. In my naive mind you had to be in LA to make movies.

St. Croix: It’s kind of parallel in a way. I grew up in the East Coast, New Jersey, and moved to Europe when I was 9 yeas old. We very quickly went from only being allowed to see Disney movies to seeing every blacksploitation, karate, anything that Tarantino ever talks about seeing, I got to see because that’s what they had at army bases on Saturday afternoons to show the army guys. My parents would run out of churches to go see them. We’d seen the Mona Lisa so many times, so they’d drop us off at the movie theater, and we loved movies. So we saw all these action movies, and every piece of crap that was on 42nd Street. I’ve just alwasy loved movies and wanted to make them. Star Wars was the big one, I wanted to be George Lucas or Steven Spielberg. That was it. But something weird happened, I was making movies in my backyard, I was going to go to USC Film School, this was my dream. When I was about 16 my friends band lost a singer and asked if I wanted to sing I said “Why not?” 20 years later passed by, so I jumped into music for a while. I still always loved movies, I kept my finger on the pulse of that. Not much unlike Dave, I wasn’t too much into horror untiI got into a rock band. It was Re-Animator, Toxic Avenger, in our minds the worst horror movies we can find. I didn’t want to see good movies, we wanted to see the bad stuff.

WAIH: What are some challenges making movies in a place where there is no real film industry?

Buchert: Well there’s a lot of local talent because of the amount of music videos being cranked out over the last 20 years. There’s actually a good amount of production work out here. Only recently there’s been bigger movies being shot out here, but there’s a surprising amount of talent in town. We have a great crew that’s been working on commercials for 20 years.

St. Croix: We got lucky. We came up with our friends. Matt Hamilton, whose our sound guy on everything we do, I worked on the first every sound project he was on. You just get better, and they get better and you just row. You get this real kind of closeness with all these people who came up at the same time and decided to stay. There’s no real film industry infrastructure here, but in the last three years, it doesn’t really matter where movies are shot anymore. Nobody cares anymore. The audience doesn’t care what studio it comes from, and the audience, especially in horror doesn’t need to have famous people in it, they just want a great movie. And it works out for us because we don’t have a lot of money and we are not in Los Angeles.

WAIH: Let’s talk about In The Dark. How many stories are there?

Buchert: There are three stories and a wrap around. You can tell from the trailer, they are wildly all over the place. It’s got action and horror, horror with really dark twisted comedy, and horror thriller. In the trailer, when you see the Keeper creature, grim reaper looking guy, that’s in Chris’ story. And he has people running around with shotguns, monsters attacking people, tearing them up. Mine is Dummy, the slasher with the mask. I try to make an early 80’s De Palma kind of John Carpenter film, so there’s not a lot of gore. It’s still a slasher because there’s a guy with a mask chasing a girl around. There’s nothing really gory about it, it’s more of a thriller.

WAIH: Who directed what? Did you guys direct or write anything together?

St. Croix: We wrote and directed our own pieces and then produced for each other.

Buchert: In addition to that, I was the gaffer on the film. I lit his films, and he edited all of them, but it’s awesome though.

St. Croix: We just wanted people to see it, and get better at what we do. We just want to make a cool funny anthology. It’s not that we’re making an homage to old films that we love like Creepshow or Cats Eye, but we wanted to make a more traditional anthology, that looked and felt like a movie instead of just sort of running around with a camera. We felt that, you know, a lot of people do that because they don’t have a lot of money, but we decided to work that much harder to make it look like we did have a full crew and like we did have all those other things and not let it be an excuse.

WAIH: Looking at the trailer and poster for In The Dark, you seem to have created a very iconic character with that Dummy mask. Did you guys design it, or did you buy it?

Buchert: Yeah, you know the funny thing is, I had the idea in the story, but I knew if I didn’t find the right mask that I didn’t even want to make the story. That sounds hardcore, but it’s not a thing where on the day you say “Oh, let’s put him in a hockey mask, that’ll be cool.” I knew that I had to have that mask because its so integral to the story. I found it online, I contacted the guy’s website. He called me an hour later, let me backtrack. In my email to him I said “I’m interested in the mask, do you own the copyrights? I’d like to talk to you about it.” So an hour after that I get a phone call and he just start’s into it, “What do you want to know about that mask?” I told him I wanted to use it for the film, he said we can use it. I made a deal with him to use the mask. I think we actually went through production, and has some promo art up online, and somebody else contacted me out of the blue. He said, “I made that mask, I want to talk to you about it.” So then I talked to this other guy who actually sculpted the mask. He was commissioned to make the mask. So the first guy I talked to, he just sold it. The other guy was the guy who made it. Chris and I were in Chicago, which that’s where the mask maker lived. So we actually went and had deep dish pizza with the guy who sculpted this perfect mask for me.

Buchert: His name was Joe Lester, and unfortunately he passed away about a year ago. Chris, when did we meet him?

St. Croix: About a couple years ago. Fearfest, 2000 something, I don’t remember.

Buchert: Super awesome guy, we sat with him for a couple hours, we talked. I talked to him a couple more times through email, and someone posted on Facebook, said he was gone, I was like shit. He didn’t even really get to see his mask in the film, you know.

St. Croix: But we dedicated something to him.

WAIH: Now with distribution, do you have any plans for DVD or Blu Ray, or is it only through VOD?

St. Croix: Our deal with Gravitas Ventures is an all digital deal. We decided to hold off on theatrical, just in case we decide to go on tour with it, but as far as DVD it will be available on Amazon through their create space situation. Blu Ray is just really expensive. It breaks our hearts, because we want people to see it in HD than standard def. The amount of work we did to make it look beautiful, it’s really kind of a pain in the ass when you think about it. But the upfront on Blu Ray is just too much to justify it. We did a bunch of conventions over the years for different projects, and nobody want Blu Rays at horror conventions. You know they sell ten to one DVD. What they told us is they don’t have Blu Ray players. You know, we were a little dumbfounded by it. 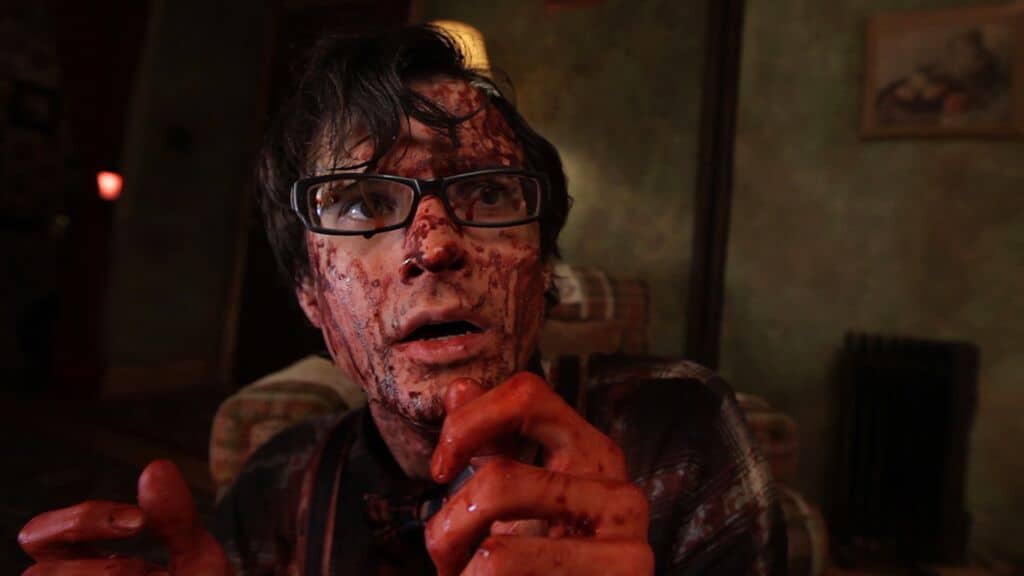 In The Dark is now out on iTunes, Amazon, Playstation, Vudu, Microsoft Movies, and other VOD services Be sure to follow David and Chris on Facebook. Also, be sure to check out all the other great movies coming out on Indie Horror Day