It’s a cold, dark night; you are home alone watching a scary movie when suddenly a rustling outside is heard. You turn to look but nothing’s there. A few more minutes past, the movie is the highest point of tension and BANG! The noise comes from outside, so you go to investigate. That’s when you see him. Tall, shadowed, and masked. Run!

Throughout the years of marvelous cinematic excursions within the horror genre, masked killers have terrorized family, children, and teenagers. A mask on a killer always instills fear within the characters and the audience watching. There are a select few that bring a cold sweat to the strongest of victims or viewers palm. We Are Indie Horror has done their research and now bring you the scariest masks worn by killers in movies. Go on if you dare.

The family of masked murderers grace the first position on WAIH’s list of scariest masks. Their masks, particularly the father’s, are chilling to the bone. A burlap sack with the eyes cut out, instantly makes the bravest victims cower with fear. Along with the creepiness of their masks, the reasoning for the murders accentuates the vibe given presented. “Because you were home.” Within horror, it is a rarity to receive an answer as to why, but when one is given it is never as simple as that. Not everyon is going to be killed by the undead son of a crazy women. These cold blooded killers attack the same way door to door Jehovahs Witnesses preach. When you are most vulnerable alone in the privacy of your own home, The Strangers can strike.

Arguably the most classic slasher, Texas Chainsaw Massacre’s Leatherface, bears a mask with an incredibly deep backstory which puts it on the list. First off, Leatherface wears multiple different masks at various points throughout the film. The masks are faces of his previous victims. Wearing someone else’s face as a mask is the most badass and scary facial covering any killer can aspire to have. Their last expression which is most likely one of absolute terror, is forever enshrined on their killers face, making Leatherface a killer to fear on looks alone. Depending on the situation in the film, Leatherface will change his masks to match the occasion. For example, during the dinner scene towards the end of the film Leatherface shows off a make-up covered girl’s face to be considered “dressed up”. You can be sure when wandering into the wrong part of Texas and a chainsaw is heard, the face of your terror joins Leatherface’s ever growing collection.

Any horror fan, when asked, would put John Carpenter’s Halloween on their top ten favorites list. Michael Meyers is a demon incarnate, with an urge to kill that is virtually unstoppable. His mask, originating from a Captain James Tiberius Kirk’s face, has become synonymous with the slasher genre. After hours of mutilating the mask, the production team for Halloween ended up with a disturbingly dead pan stare. With it’s white appearance, Michael’s mask seem as though he is a ghost from beyond the grave returning to reclaim what is already his; your soul.

With it’s unique viewpoint on the slasher genre, Behind the Mask: The Rise of Leslie Vernon places this film as a must-see for any horror fan. Behind The Mask takes the audience deep into Leslie Vernon mind, following him as he plans and executes an inevitable and stereotypical slasher slaughtering. Leslie is a nice and silly gentleman but when the mask comes on, he is transformed into a more sinister being. The masks sports large eyes which are amplified by black eye makeup. The combination of the eyes with the judgmental frown create a terrifying nightmare you cannot escape. Leslie knows the sins committed and cannot pretend as if the wrongdoer is innocent. 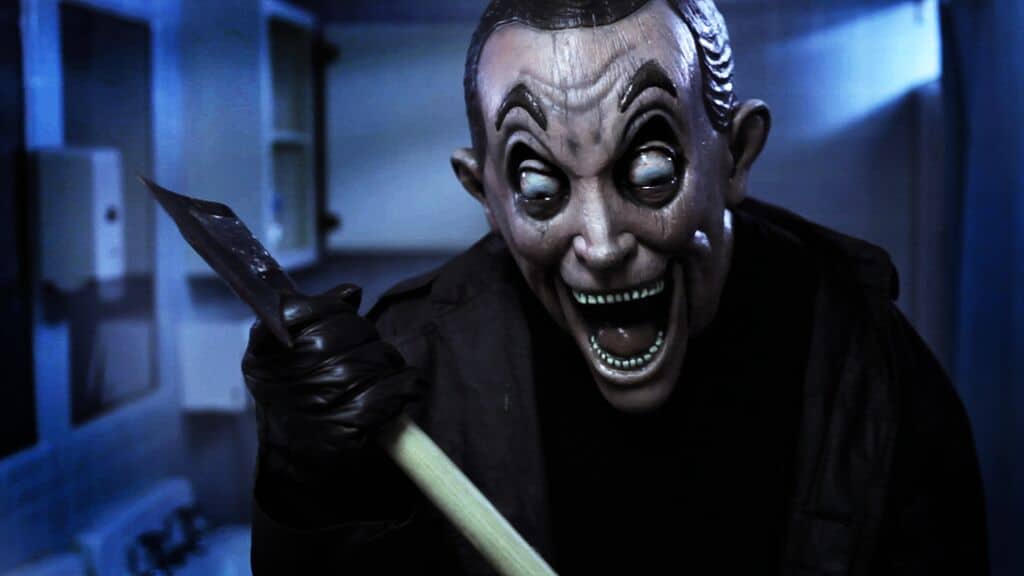 Chris St. Croix and David Bechert’s 2015 anthology film, In The Dark, created a new slasher with a mask reminiscent of the old vaudeville days. The community has spoken and ventriloquist dummies are scary. They are even more terrifying when they carry around an axe, chopping through human bodies. The mask has a sociapathic smile and a piercing stare which gives the illusion of pure madness. Although just a mask, the thought of the face behind it bearing the same expression adds more terror to the craziness. With the recent resurgence of slasher films being released in the past few years, it’s no surprise In The Dark is receiving the recognition it is. We can only hope for a devoted sequel to this story with a lot more blood and of course The Dummy mask returning.

Technically more torture porn than slasher, The Collector is a jigsaw type killer but more creativity and far fewer chances of escape. He does not want to play a game, he wants to add his victims to his collection. Especially in the sequel The Collection, mass murder takes on a whole new meaning. The killer takes his time to plan out every detail of his murders, and treats it more as an art from than a regular slasher. He is nuanced and tactful, which shows in his mask choice. The simple but effective mask, gives him no face thus taking away the part of his humanity which accounts for sympathy and mercy.

In the 2008 classic Midnight Movie the supernatural slasher comes in with a vengeance. With fear being his favorite flavor, he relies on good solid scares to get his kicks. What better way to instill his god-like fear than with his menacing half skull mask. The veil is scary enough to make a big ol’ biker whimper like a little puppy. Even if his victims try to hide and show no fear, he finds it and finds them. Midnight Movie is a film that was surprisingly ignored by the masses, but happens to be one hell of a thrill ride.

When looking through this particular list, one common factor is noticed. With the exception of The Collector and The Strangers, each film is considered independent horror. All with low budgets which have to utilize their surroundings and cut corners whenever necessary. When horror artists are backed into a corner, it is intriguing to see the brilliant and creative ideas which flow from within.