At this point, we highly doubt you are not aware of the immersive theater experience that we have been covering since February, The Tension Experience. For the last 10 months, the lives of many people have been challenged and most importantly changed. For one in particular, this head editor and co-creator of We Are Indie Horror, the amazing piece of art has touched me in more ways than I can express. I am going to break the fourth wall for a moment, as Tension did many times over, and give my overall feelings of this wonderful experiment.

Coming from the sick and twisted minds of Darren Lynn Bousman (Saw II, III, IV, Repo: The Genetic Opera, and the upcoming Abattoir) and Clint Sears (Tales of Halloween and Crow’s Blood writer) was a puzzle inducing, emotional raiding, and community building we called The Tension Experience. Back in February, a puzzle was posted online by a friend of mine and my  curious nature figured it out. The puzzle led to a phone number, which I promptly called. I entered the Rabbit Hole. 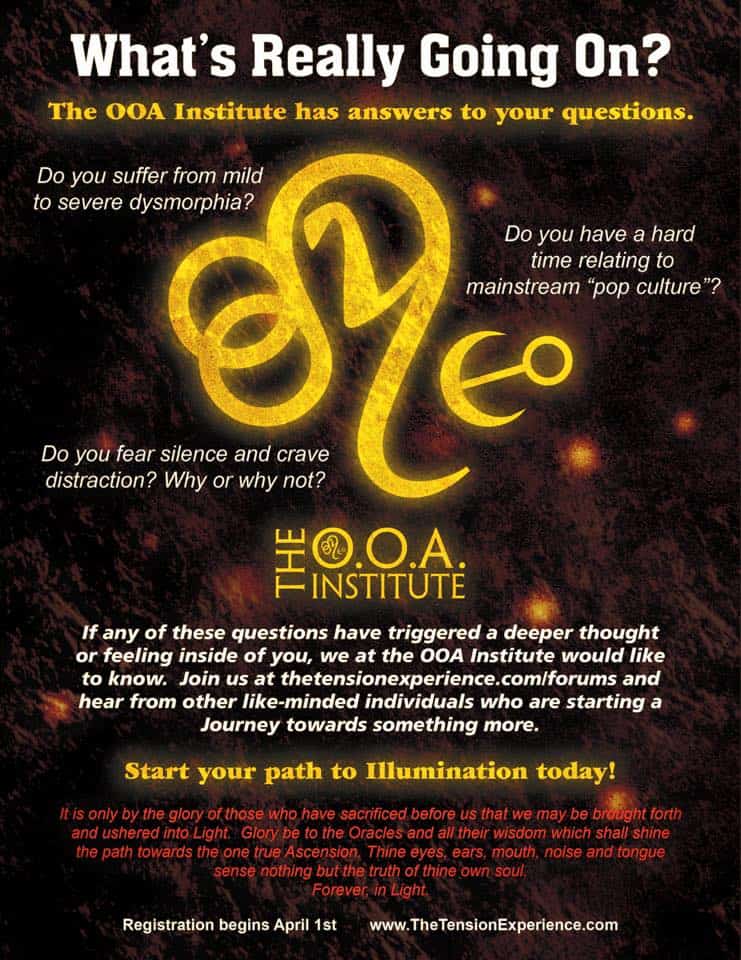 What the next few months would have in store for me was completely unexpected. The first event was a “consultation”. We had to be grilled, to see if we were worthy of The O.O.A. At the time, this felt complicated and confusing but now upon reflection it was so simple. Following the initial event, that had everyone talking and kind of scared, came personally catered events in which the story unfolded more. Be it meeting an O.O.A. runaway or a sleazy private investigator too obsessively wrapped up in the insanity of the cult, everyone involved had their own story and path to follow.

As the story progressed, secrets of the mysterious O.O.A. were becoming more prevalent. The website (www.thetensionexperience) opened up and created a forum which in turn started a community. The community had a mind and personality of it’s own. What started as small meet ups grew to experiences which became part of the story line. From coffee to pool parties, this community was welcoming and growing. Eventually sides were drawn and the community split. Were you BoS or O.O.A.? Everyone had their view and strongly voiced all their opinions whenever given the opportunity.

Early on, we were introduced to Addison Barrow. She started as a follower of the O.O.A. recruiting us and moving her way through the ranks of the mysterious organization. We began to meet new characters called Gatekeepers. The first was a leader, introducing the eventual “apostles of the beginning” into the world of Tension. Followed by a scary character, who was presented as intense and sassy. Gatekeeper 4 became the favorites of many. Enter Gatekeeper 3, and lines are drawn. He was unpredictable and murderous. One particular member of the community took it into his own hands to end Gatekeeper 3. At this point an incredibly unprecedented event. It was streamed over Periscope and everyone lost it. A “participant” killed a character in the “show”. How can that be?

Time continued to go on and the story continued to unfold. Random community events here and there. Scavenger hunts for packages with photos, emails, and more kept the event a live and all the members interested. The community was growing. The story getting deeper and more intense. The “game” was crossing lines. Making phone calls from other people’s numbers, supposedly invading privacies, and understanding more of the participants than they knew themselves.

Ascension was announced with much mystery surrounding. Ascension was their major event, the one we all waited for. Information gathered itself around this event. We discovered it to be a two plus hour experience in a giant warehouse. The community members signed up immediately despite the price because we knew what could be offered from The Tension Experience. Most of us returned twice or more times. Proving every penny worth it.

Right before Ascension opened, Darren Lynn Bousman was named as the creator and mastermind behind Los Angeles’ quickest growing cult. Although he was said to be the mind behind it, the story continued and negated him as a part of it. By breaking down the fourth wall to reveal Bousman behind it and then immediately building it back up with periscopes and emails saying that he is the fall guy, the lines between reality and fiction were blurred even more. The moment everyone felt comfortable with the situation, something or someone would come along and erased it.

I personally went through Ascension twice. The first time was an incredibly surreal experience. My mind was challenged. My emotions were put on display. And physically I was put through activities I never thought would happen to me. All physical violence that occurred was for a specific purpose. The message of the show was to disconnect from the outside world. Put down that cell phone and look up at the world around you and connect with other humans. How do you do that? Well first, you strip of your normal street clothes and wear a white uniform. You open your mind to the challenges presented thinking about life, death, and everything in between.

One of the most challenging rooms to most came early on in the experience.The Red Room, described as bizarre and strange, forced participants to open up about their deepest and darkest secrets. The two judges in the room, naked, determined if you were lying or telling the truth. Even if you were telling the truth, it may not have been good enough for those who held your fate. After you were forced to open up to complete strangers and peers, all senses were taken away. Your vision, hearing, smell, touch, and even your taste gone in an instant. All with the purpose to free yourself from the materialistic world we currently inherit.

Following the deprivation of senses and the secret revealing, each participant had a different path. My personal path was one to ascend. I was “chosen” as worthy enough to try and ascend to higher powers and speak with Anoch, the God of The O.O.A. For the most part it was calming and eye opening as the rest of the show progressed for me. I was wined and dined to be completely torn down by being shoved into a room with a camera recording and told to say goodbye to everyone I know and love. Taken by shock and surprise, I complied. Eventually I was put up on the stage and brutally murdered by our leader Addison.

That was not the end. The story continued to evolve and grow as Ascension stayed open, selling out weekend after weekend. As I went through my second time, things changed. Subtleties of the presentation adapted and altered.  New characters were present, ones who became more important as the finale came upon us. Addison became more in control and more unhinged at the same time. She moved her ranks through The O.O.A. but more secrets were coming out. The mind control wasn’t working anymore and she was breaking. The second experience through put me in control. Witnessing the control room, choosing who should be ascended, and watching as people had their senses stripped from them caused for a whole new way of seeing the show. I was treated to a few special incidents on my second time through. Each new scene progressed the story even more.

Last night, I was invited back to the compound. I was allowed to enter the doors of The O.O.A. one last time. Myself, along with about 50 of the die hards, were witness to The End. The finale. We walked the halls for that last time bearing witness to a massacre. Blood covered the walls. Rooms were torn apart. All the beloved characters we have gotten to know over the past 2 months or more were brutally murdered. Not just bullet holes but some went down fighting, like many participants favorite, the foul mouthed Brit Simon. Seeing the blood and the death presented shook everyone to their core. We were then placed in the showroom where all of us have seen much death and the attempts to ascend. These last 10 months all led to what was revealed here. Addison was the experiment, we were the experiment. We were introduced to Sabrina Kern the actress who was casted to play Addison and became too involved and brain-washed with the false teachings of The O.O.A. She was brought back to the real world and shown the truth. As were we. The world we knew and loved was crumbled in front of us.

Before I get into the little easter egg that was presented to me on my way out, I have to give a shout out to everyone involved. The Tension Experience is a truly unique and phenomenal experience which has redefined immersive theater for ages to come. The entire cast were top notch A-list performances. Not a weak link in the mix. Be it in the events leading up to Ascension or the actors within the walls of Ascensionthemselves, everyone delivered night in and night out. They all knew who we were and why we were there. The actors interacted with all of us each and every time in a unique and personalized manner. Sabrina Kern, the actress who played Addison from day one, has proven herself to be a force to be reckoned with. She never broke character and was able to become Addison Barrow. She has been interacting with us for a long time now and has gotten to know most of us on a very personal level. Sabrina was the star and rightfully so.

Darren Bousman ran one of, if not, the most intense and intricate  shows ever presented. The logistics of how the characters could be everywhere at the same time is enough to make any one insane. Serious kudos to Clint Sears for the beyond amazing script which was rumored to be 500 pages. And a huge thank you to Gordon Bijelonic who came out of the shadows last night and introduced himself as the producer. Without him, I do not believe any of this would be possible.

From the initial puzzle to the final chants of “Glory Be” outside the compound, the entire Tension Experience has forever changed my life and many others. None of us will ever be the same and we are all okay with that. The events that transpired over the course of 2016 will never be forgotten. The friendships made will run deep for the rest of our lives. And the mystery of The O.O.A. will haunt our nightmares night in and night out.

Now onto the little hint I was handed on my way out. One of the man in the masks passed me a piece of card stock. At the time it was quite dark and I thought it was blank and just a piece of one of the torn down posters. Upon further inspection I was quite wrong! It looks as if the Bousman, Sears, and Bijelonic have another event up their sleeve. Below is the card that was presented to me. As The Tension Experience ends we welcome in 2017 with THE LUST EXPERIENCE!