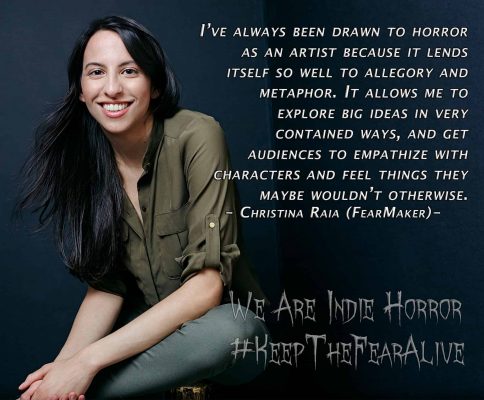 When asking any professional filmmaker what is their key to success, chances are they will all tell you the same thing; just do it. No, they are not sponsored by Nike, they are speaking truth. The main difference between people who want to make movies and filmmakers is that: people talk, filmmakers do. The ambitious go getter is the exact trait which differentiates this weeks featured fear maker from the rest of the herd.

New York City based Christinia Raia has been working diligently for the past few years with an endless list of actives. She has created her own production company CongestedCat Productions, LLC. Co-created, directed, and produced an award winning comedy show called Kelsey for blip.tv; which was named one of the 19 Best Comedy Web Series by Indiewire.com. On top of this she has been curating her own independent film festival called IndieWorks, which is a monthly showcase featuring other independent filmmakers in New York City. And the biggest task of the past few years has been creating and now currently currently promoting her first horror feature Summit.

Christina’s first experience with horror came at the young age of 5 when she saw the cult classic Pet Sematary. Now on a nonstop quest for all things horror, Christina found Twilight Zone marathons really got her creative juices flowing. “It [Twilight Zone] was a huge influence on me as a storyteller, how you can play with a viewer’s perception and entertain and enlighten at the same time.” The anthology based sic-fi/ horror taught Christina how to simply tell a story.

Back in 2012, Christina found herself inspired to write a script and after sharing it with friends and colleagues Christina knew she had to make Summit. Before taking on a task of a feature film, she had only made a couple short films, which led her to feel unprepared to approach such a challenge. Just like becoming a new parent, you are never really ready, sometimes jumping in head first and hoping for the best is the only way.

As any feature, the first big challenge is funding. Christina’s answer was to start a Kickstarter with her friends to raise a needed $12,000 for her film. Summit not only reached its goal, but exceeded by great numbers. The next year was carefully spent in pre-production. Although difficult at times, Christina and her team managed to solve any and all issues that came their way by “doing everything kind of DIY and grassroots, getting locations and materials often for free in exchange for gratitude and credit.”

“…I had only made a couple of short films (none of which were in the snow or extreme conditions) and had no access to funding and advanced resources. But I was determined to make the film, and make it well. So I dove in head first…” -Christina Raia

Summit was shot in January 2013 and every day proved to be a challenge. As shooting approached two principle locations were lost, a few crew members jumped ship, and the weather conditions proved unfavorable. Shooting a film in Massachusetts in the middle of winter allowed many of the night shoots to go below zero degrees. To keep track of this particular challenging shoot, Christina wrote a directors journal blog called Shooting Summit. When production wrapped in February, they went $8,000 over budget and left battered and bruised. Coming out of such a treacherous production, Christina left all of her uncertainties and doubt from lack of experience or knowledge in Massachusetts. Even though Christina only had a few shorts under her belt and did not feel qualified to make a feature, she dug deep, persisted and persevered all the way to the other side of this freezing snowy journey and emerged as a feature filmmaker.

Summit premiered at the Manhattan Film Festival in 2015, receiving the award for Best Horror Film. Summit‘s festival career has been nothing short of spectacular. It seems every week there is another announcement of a new festival and or award. The film has claimed official selection or special presentation across an incredible amount of festivals including ScareACon, Rhode Island International Film Festival, Vortex Film Festival, and most recently Macabre Faire Film Fest.  Summit stars Lauren A Kennedy, Rob Ceriello, Emma Barrett, Ryan Kramer, and Ricardo Manigat.

Five college friends hit the road for a ski trip. When they end up at the wrong location and can’t backtrack because of the intense cold and secluded surroundings, they decide to take shelter in an abandoned house overnight. When they wake in the morning, things are not quite what they seemed and it’s too late to turn back.

If you are not able to see Summit at one of the many festivals around the country, do not worry. The horror feature will be coming to VOD very shortly and We Are Indie Horror will be sure to let you know when.

Christina Raia is clearly surrounded by an incredibly talented, driving, and supportive team, but it is her unmistakable persistence that carries her to new heights. She does not only talk about making movies, but goes out there to make them. No matter the challenge or the sacrifices that appear in the process she continues on. That is what makes her a real filmmaker.

You can follow and absolutely should follow Christina on Facebook, Twitter, and check out her videos on Vimeo, or go to christinaraia.com. If Summit is any indication as to how her career will go, you may want to start following her now because it is sure to be a good one.