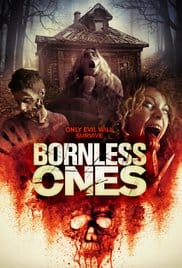 Produced by Black Drone Media and distributed by Uncork’d Entertainment, Bornless Ones is a cabin in the woods film, strongly influenced by The Evil Dead. Looking at the plot outline for Alexander Babaev’s film, viewers familiar with the genre will know exactly what they’re in for when viewing the movie.

There are two couples, moving into a new home that one of the pairs, Jesse and Emily, have purchased in order to be near a treatment facility for Emily’s brother, Zach. Their friends, Michelle and Woodrow, are there to help get them moved in and offered moral support. The house they’re inhabiting is first glimpsed in the films cold open, wherein a mother is tormented by her daughter, who has coal-black eyes and a spooky tendency to refer to herself in both absent terms (“your daughter”), as well as the royal we – as in, “we want to play.” Creepy shudders all around.

Maybe if Jesse and Emily’s realtor had offered up more than slippery and evasive references to that cold open, things wouldn’t go awry as they do, but if not for hidden motivations and spooky secrets, the cabin in the woods horror subgenre would never exist. All of the characters will eventually be put to the test in some way, shape, or form in regards to their own secret thoughts and pasts, so it actually bodes fairly well for the way Bornless Ones will work itself out. 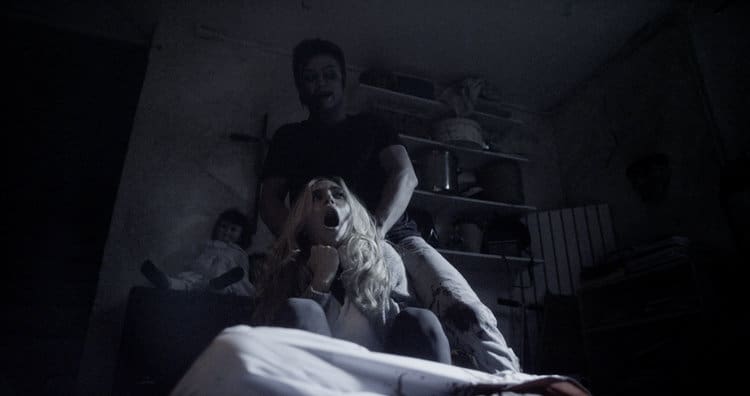 Obviously, at some point in the past of this house, someone messed with occult things which they shouldn’t have, and the demons have taken things over. Characters are alternately tempted and attacked,  and things get rather claustrophobic rather quickly. Everyone will need to fight so as to not be dead by dawn, but it’s fairly much a given that most of the characters are grist for the mill.

As such, the actors in a film such as this usually aren’t required to do much more than scream and bleed, and there’s ample opportunity for that here. The blood-letting’s not particularly explicit, but director Babaev’s more than happy to let the idea of an act be more than terrible enough to give the viewer a queasy stomach. That said, he’s also willing to show the audience enough stabbings to make even the strongest gorehound happy.

All of the acting’s pretty solid, but the strongest work here comes from David Banks, whose brief role as realtor Richard Alonzo Jr III is delightfully sleazy. Not since Hart Bochner as Harry Ellis in Die Hard (“Hans. Booby. I’m your white knight.”) has there been someone so perfectly smarmy in a role. Of the main cast, Mark Furze as Woodrow seems to be having the most fun, and really getting into his part. He’s simultaneously the jock, the best friend, and the goofball, which lets him show a lot of range, and Furze is just a blast whenever he’s on screen.

Bornless Ones has some really great moments, and while not the newest concept for a horror film, it’s definitely a fun ride to hop on for its 90 minutes. It hits all the right beats and plot points, and the way in which it descends from happy-go-lucky road trip to blood-soaked hell night is impressive to behold.

Bornless Ones will hit theaters and VOD on Febuary 10th.