In the world of indie horror, there is a production company constantly turning our quality work and making a huge name for themselves in the community. This company loves the scary and the weird. They also have successfully ran multiple crowdfunding campaigns; one campaign was not so lucky. The important idea to understand is the talented and hard working individuals in this group of artists are working their way up and are living their lives as horror filmmakers. We are talking about none other than We Are Indie Horror‘s good friends and partners in crime Seraph Films.

Recently Seraph Films launched a campaign for their latest short film, Indictment. Written by Jhan Harp and Rob Stith, Indictment will be directed by the head of the Seraphim, Gene Blalock. The story is as follows:

A jailed, amnesiac African American suffers brutality at the hands of a vicious, prejudiced police officer. The tables turn when he learns the truth of his recent near-death experience in a twist of fate that the narrow-minded cop never saw coming.

The “twist of fate” mentioned in the above synopsis was disclosed to We Are Indie Horror and we will say that it will absolutely fit within the horror world and adds that Seraph Films flair to a film handling an important issue such as social injustices in the United States. When it comes to a Seraph Films story, the audience can always count on a beautifully shot scary story that dives deeper into serious issues.

We Are Indie Horror asked Gene Blalock of Seraph Films a few questions regarding the success in crowdfunding and the reason he used GoFundMe over the normal Kickstarter or Indiegogo. The response, which you are about to read, is real, raw, and inspiring. Was indie artists and fans of the indie arts, all of what you are about to read are key to understanding success within this tough world. Without further ado – Gene Blalock‘s – “Crowdfunding and it’s Vital Role In Indie Horror Filmmaker”.

Making a film has never been easier or more accessible.  With high-quality, even 4K, cameras available in most decent cellular phones, along with large capacity hard drives and fast computers, almost anyone can produce a film today.  Unfortunately, viewing many of the results on YouTube, one cannot help but recognize that simply because one CAN produce a film does not necessarily mean that one SHOULD produce a film.  Put politely, the quality of the bulk of amateur video is underwhelming.  And while many of these films can be viewed as learning opportunities for everyone involved, for the great majority, these films are simply not very good.

For the few who stick it out, learn proper film making techniques and invest in better gear, and spend the time to create quality material, it is possible to produce excellent short and even feature length films on micro-budgets.  However, at least at present, there is no formal way to fund the productions except self-financing and, more recently, crowd funding.  For the indie film maker who has been able to prove that they are able to spin a decent yarn, Crowd funding allows one to push the limits and reach further than ever before.  And because the process is primarily democratic – if people like your work, they are more inclined to give again or additional funding – it has a tendency to reward those who focus on quality, investing themselves in their projects.  Very simply, assuming a film maker has a modicum of talent, it rewards them for their love of making films.

Frequently, it doesn’t pay even the bulk of the expenses for really low budget films.  Rather, it allows someone who has a decent camera and some other essentials to rent a few more pieces or hire someone to assist with special effects.  It allows a film maker to ask more of talent in exchange for paying for gas or buying them lunch.  It helps in a very meaningful way to improve production.

Nowhere is this more important than in the horror film area.  As most producers will readily admit, horror is one of the least expensive genres of film to produce.  Often, poorly (but carefully) lit sets, run down locations, and other inexpensive elements are precisely what a horror director is seeking.  Unlike a primarily science fiction film, a horror film relies not on gadgetry and expensive props but rather the psychology within the script and the skill of its actors.  Because of this, incremental improvements with the budget of a horror short can have profound results on the final product.  In our experience, crowd funding both bridges the gap between having enough to shoot or not, as well as provides the marginal extra funding needed to produce something “excellent” as opposed to merely “acceptable.”

More personally. our approach to film making at Seraph Films has always been “get out there and make films.”  Regardless of how much money we have or locations, we have always sought to create.   Just so, when people are donating their time and talents, you need to feed them.  In addition, there is always the issue of props, wardrobe, and other minor items needed to tell the story properly.  Crowd sourcing helps us afford these small budget needs and allows us to concentrate on the stories.

This year, without any budget, but with access to both talent and locations, we decided to do a new short film.  Jhan Harp and Rob Stith proposed a story idea late last year.  Once I had read it, I knew it was the perfect film for Seraph to launch the new year.

As with many of our scripts, INDICTMENT was written with the locations and sets we have access to in mind; therefore, we knew we could do it “on the cheap” – we only needed to feed the cast and crew with minimal wardrobe and props expenditures. 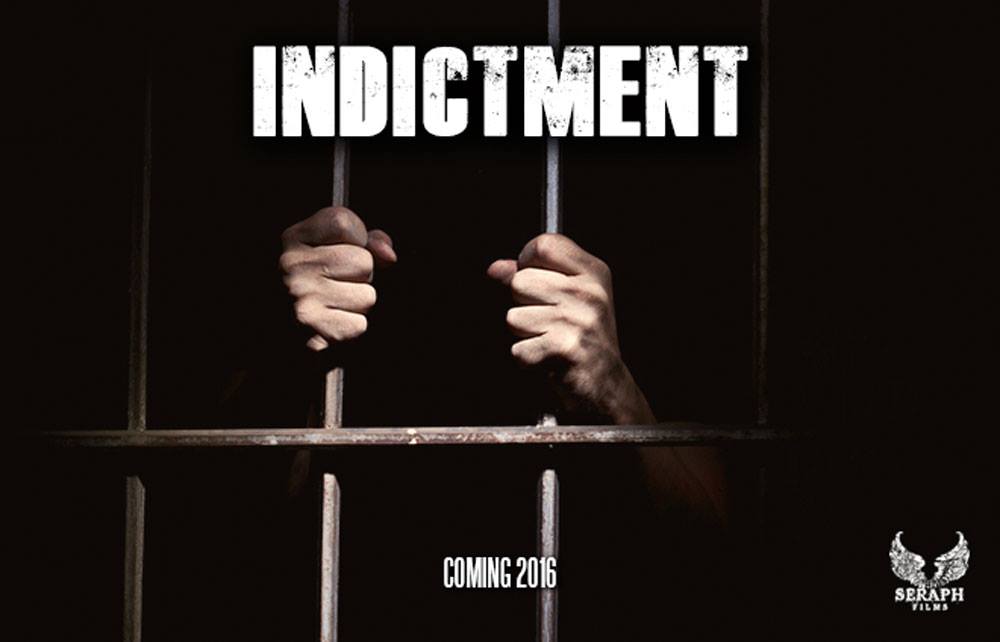 With other crowdfunding sites, like Indiegogo and Kickstarter, being over-saturated these days – to the point where many campaigns are overlooked and closing hugely unsuccessful – and since we needed very little money, we decided to use Go Fund Me as opposed to coming up with crazy perks required by the other crowdfunding sites.  We were upfront about the bare minimum we needed to feed everyone and purchase a few props, as well as what we would give in return for donations. We reached our minimum goal in just a few days.
With that said, most people do not realize just how expensive it can be to be an indie film maker.   Even the simplest of films require a huge investment of mental and physical energy from very dedicated creative professionals.   I’m proud that we have an excellent team that loves to make cool films, and who are willing to donate their time, but costs add up quickly.  For example, in the past, once a film was done, if we decide to submit it to festivals, each one can run about $40 at the low end, with no assurance that our film would be accepted.  Accepted lore suggests that for every festival you want to screen in, you need to submit to at least ten! In our first campaign of the year, even though we reached our shoestring goal, every dollar is vital for us either for production or promotion of our film.
With all this in mind, if you love watching independent films and you want to support those who create them, remember that every little bit helps.  It’s important to support creators you enjoy watching, understanding that most of the truly innovative and creative work starts within the indie community.  Your contribution allows film makers to pour our hearts, souls, and blood into every project we do, and to give you films that we hope will both horrify and thrill.

Although Seraph Films have made their goal, as stated above, there are many extra costs still needed. If you are interested in helping get Indictment to that next level, check out the links below or share with your social media world. Remember this is We Are Indie Horror’s Blood Bank Where Every Drop Counts.